The captain of a migrant rescue boat that entered Italian waters despite the threat of a hefty fine said she is prepared to go to prison over her bid to bring the migrants to safety.

Captain Carola Rackete steered the Sea-Watch 3 NGO boat into the port off Lampedusa island on Wednesday and broke a 14-day blockade imposed by the Italian government.

Italy’s interior minister Matteo Salvini has threatened to seize the ship, which is operated by a German aid organisation and to arrest its captain.

The vessel was carrying 42 migrants who had been in limbo at sea for 13 days.

Salvini said the captain of the Sea-Watch 3 broke the law both by disobeying direct orders not to cross into Italy’s territorial waters and by flouting measures that bar the migrant rescue ships of nonprofit groups from entering Italian jurisdiction.

He banned the Dutch-flagged vessel from approaching under a ‘closed ports’ policy, which has seen migrants repeatedly stranded at sea. 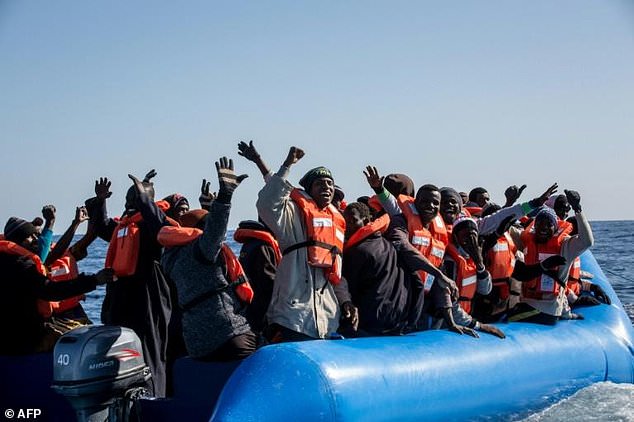 Migrants on board a dinghy. The German NGO Sea-Watch defied the Italian government to bring migrants stuck at sea to safety

‘The right to defend our borders is sacred,’ Salvini said.

Italian media played a recording of the ship’s captain informing port authorities Wednesday she was heading to Italy ‘because I cannot guarantee the safety of the people on board anymore.’ The response from the port was `’You are not authorized to enter Italian waters’.

But Rackete said she knew the risk but will still defy the the Italian authorities.

Sea-Watch tweeted Captain Carola Rackete as saying: ‘I’ve decided to enter the port of Lampedusa. I know this is risky, but the 42 shipwrecked on board are exhausted. I will bring them to safety.’

In a video post late afternoon, Rackete added: ‘And now they are waiting for further instructions from their superiors. I really hope they will take the rescuees off the ship.’

Marine tracking websites showed the vessel, registered in the Netherlands but operated by the German Sea-Watch NGO, had entered Italian territorial waters after spending 14 days sailing back and forth off the coast of Italy’s southermost island.

‘Enough, we’re entering. Not to provoke, but by necessity, responsibility,’ Sea-Watch tweeted. It added it would do so because ‘no political and judicial solution was found’ and that ‘Europe has abandoned us’. 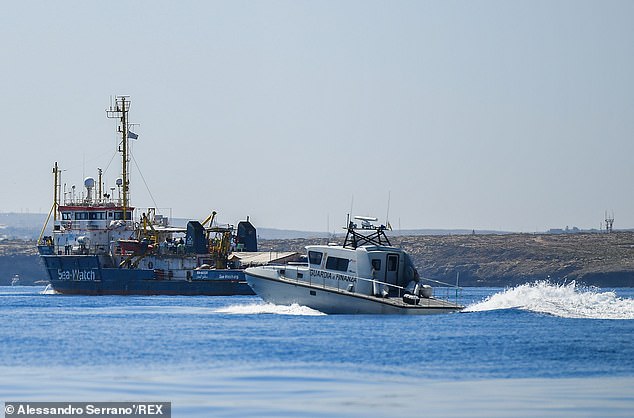 The captain of Sea Watch 3 vessel, carrying 42 survivors on board, off the coast of Lampedusa harbour, Italy

‘I know this is risky, but the 42 shipwrecked on board are exhausted,’ she was quoted as saying by the NGO on Twitter.

‘I’m ready to go to jail if somebody would prosecute me for that and to defend myself in court if need be because what we are doing is right,’ the 31-year-old German added in a video post on Wednesday.

With her long dreadlocked hair in a ponytail, she said ‘we Europeans have allowed our governments to build a wall at sea,’ adding that she has ‘the privilege to be in a position where I can actually help’.

Salvini has tried to ban the Dutch-flagged vessel from approaching under a ‘closed ports’ policy, which has seen migrants repeatedly stranded at sea.

‘Those who do not care about the rules have to answer,’ he warned in a social media post, adding: ‘What are they waiting for to issue an arrest warrant?’

Marine tracking websites showed the vessel, registered in the Netherlands but operated by the German Sea-Watch NGO, had entered Italian territorial waters after spending 14 days sailing back and forth off the coast of Italy’s southermost island.

‘We will use every lawful means to stop an outlaw ship, which puts dozens of migrants at risk for a dirty political game,’ Salvini had earlier said on Facebook. 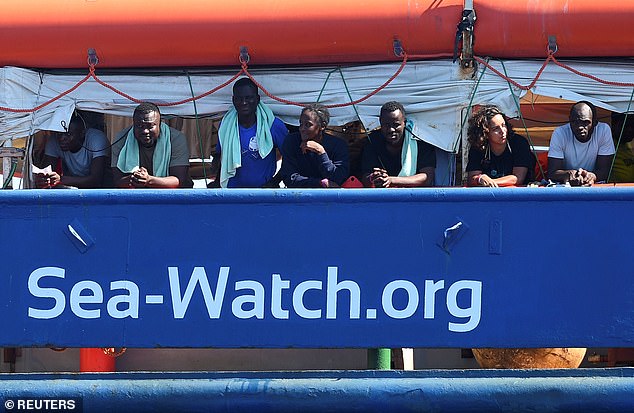 Migrants are seen at the search and rescue ship Sea-Watch 3, as it sails near the island of Lampedusa yesterday

Check this out  Heartbreak of the $100m blockbuster

‘I will not give permission for anyone to disembark… Our patience is over. The Netherlands will answer.’

Salvini said Rome’s ambassador to The Hague was ‘taking a formal step with the Netherlands government’ to resolve the issue.

Of the 53 migrants initially rescued by the Sea-Watch 3 off Libya on June 12, Italy took in 11 vulnerable people.

Salvini earlier this month issued a decree that would bring fines of up to 50,000 euros ($57,000) for the captain, owner and operator of a vessel ‘entering Italian territorial waters without authorisation’.

Italy’s interior ministry says more than 400 migrants have arrived in the country over the last two weeks aboard smaller vessels, while the Sea-Watch has zig-zagged on the high seas without a safe port.

In January, 32 migrants rescued by the vessel were stranded on board for 18 days before they were allowed to disembark in Malta following a distribution deal agreed by several European countries, including the Netherlands.

‘It’s serious when the captain has no other choice but to honour her sense of responsibility at the cost of personal consequences,’ said Carlotta Sami, spokeswoman for the UN refugee agency in Italy, adding that the ‘criminalisation of NGOs must end’.