A newly renovated section of the Great Wall of China has collapsed after weeks of heavy rain in the northern region, prompting suggestions that recent repair works on the centuries-old structure are partly to blame.

The damaged site is adjacent to the historically significant Yanmen Pass in Dai county, Shanxi province. The site has been closed since July 22 and local tourism authorities are now taking emergency measures to repair the section.

Critics have suggested that the renovations projects at various part of the Great Wall have weakened the foundation of the structure, making it more susceptible to erosion and collapse. The damaged site (pictured) is adjacent to the historically significant Yanmen Pass in Dai county, north China’s Shanxi province. The site has been closed since July 22 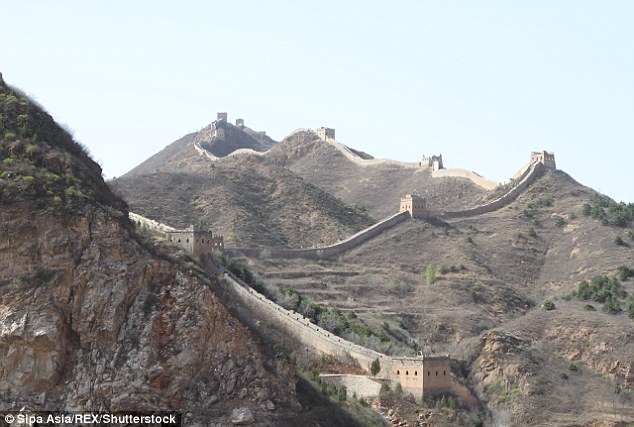 A report by Global Times have pointed out that the 500-year-old Yanmen Pass has stood for centuries without ‘help’ from local officials. The mountain pass was built during the Ming Dynasty (1368-1644) and sits in the Yanmen Mountains, 20 kilometers (12 miles) north of Dai county.

Separately, a report on WeChat claimed that another construction site of the Great Wall along the Yellow River had collapsed due to heavy rainfall and construction.

‘Sometimes, I would be thinking, why you [people renovating the Wall] can’t take your job more seriously. Why can’t you devote all your energy in repairing the wall?’ read the article published by citizen journalist account Xiaozhanbianjibu.

The article struck a chord with many netizens who are unsatisfied with the shoddy renovation projects along the Great Wall, which are reported to be rampant all over the country, according to Global Times.

The reopening date of the collapsed section will be announced later, according to a notice released by the Yanmen Pass Scenic Area. 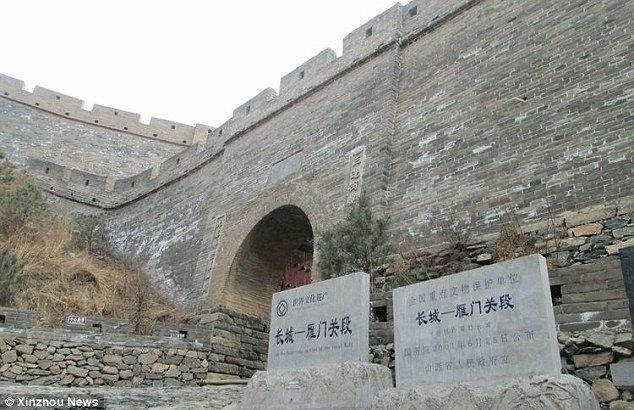 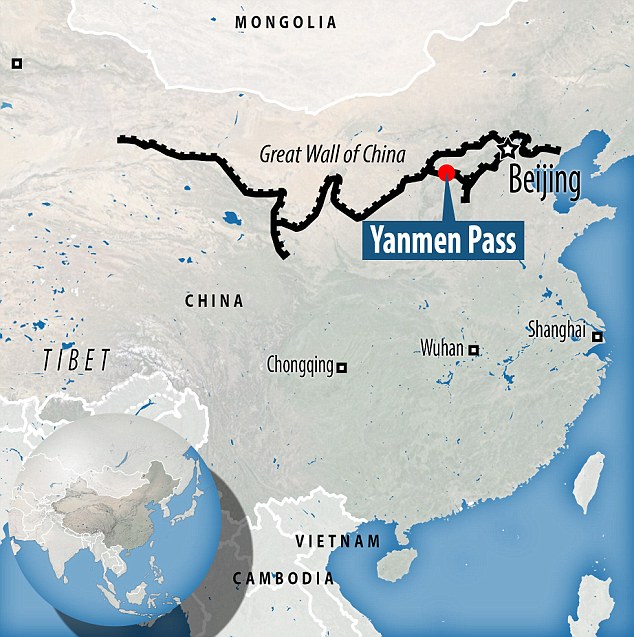 The Yanmen Pass was built during the Ming Dynasty (1368-1644) and sits in the Yanmen Mountains, 20 kilometers (12 miles) north of Dai county, Shanxi province

‘Due to recent heavy rains, some areas of Yanmen Pass Scenic Area have collapsed. In order to maintain the safety of our tourists, the site will be closed for repairs from July 22,’ the statement read.

A staff worker at the tourist spot told MailOnline that restoration works are difficult to carry out as the site is located on a steep rocky slope.

‘Heavy-duty vehicles won’t be able to get to the site,’ he said. ‘Only small vehicles can get onto the slope. The bad weather is also hindering repair efforts.’

The Great Wall of China, listed as a World Heritage site by UNESCO in 1987, was initially built in 7th century BC to keep invaders out of the Chinese Empire.

The Badaling Great Wall in Beijing, the most visited section, receives more than 20,000 visitors every day, according to Xinhua News.

The Chinese government has been ramping up efforts to rebuild different sections of the wall to boost each region’s tourism industry.

However, experts have warned that inappropriate renovation could bring more damage than protection to the site. 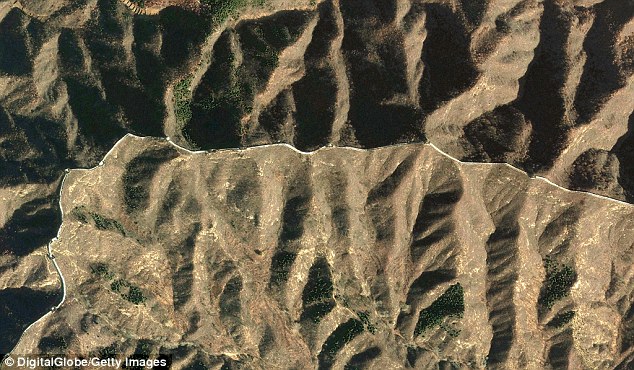 A DigitalGlobe satellite imagery of the Great Wall of China shows that the structure stretches about 21,200 kilometers (13,000 miles) and spans 15 provincial areas 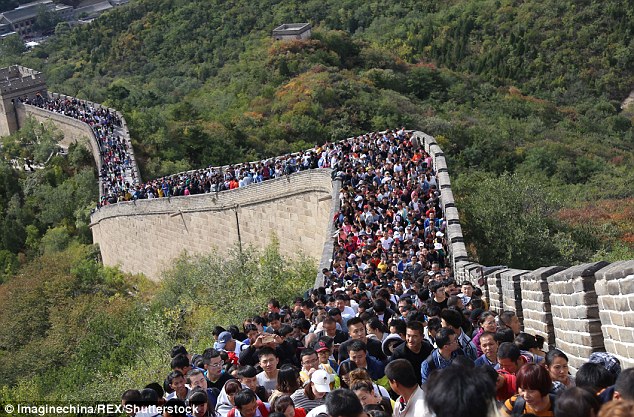 The Badaling Great Wall in Beijing (pictured) is the most visited section and receives more than 20,000 visitors every day, according to Xinhua News

In June, online reports about a botched renovation of the Wall in Shanxi’s Datong surfaced. The reports claimed that modern materials made to look like ancient brick were used in the repair work.

Authorities have denied the reports and said that the materials were ‘handmade bricks based on ancient methods.’

In 2016, a repair team had paved a section of the wall in Liaoning province over with smooth cement, sparking outrage among the Chinese people. The local tourism administration later explained that the intention was to ‘make it more suitable for tourists to walk on.’

Xinhua also reported in 2004 that in the Baiyangyu section of the Great Wall at Qianan, Hebei Province, some 300 meters (984 feet) of the Wall was painted white by the construction team.

Wang Guixiang, a professor of ancient architecture at Tsinghua University, told Global Times that some construction teams lack knowledge about the protection of cultural relics, adding that if damage happens during renovations, it would be ‘irreversible’.