So much for keeping it clean: Locals stunned as council blows £74,000 on anti-litter mural that appears to show a pigeon having sex with a rabbit

A council’s attempt to spread the anti-litter message by painting a mural has been branded ‘obscene’ after locals claim it shows a picture a pigeon having sex with a rabbit.

The tax-payer funded campaign which states ‘keep it clean’ has gone viral for all the wrong reasons, and residents in Staffordshire have said the council should repaint it.

The artwork is the centrepiece of a £74,000 Government-funded project aimed at reducing rubbish in deprived areas.

Newcastle-under-Lyme Borough Council paid a local graffiti artist to design a mural at a littering hotspot in the town.

But residents have branded the image, which appears to show a pigeon grabbing onto a crouching rabbit which in turn is holding onto a rat’s tail, as ‘obscene’. 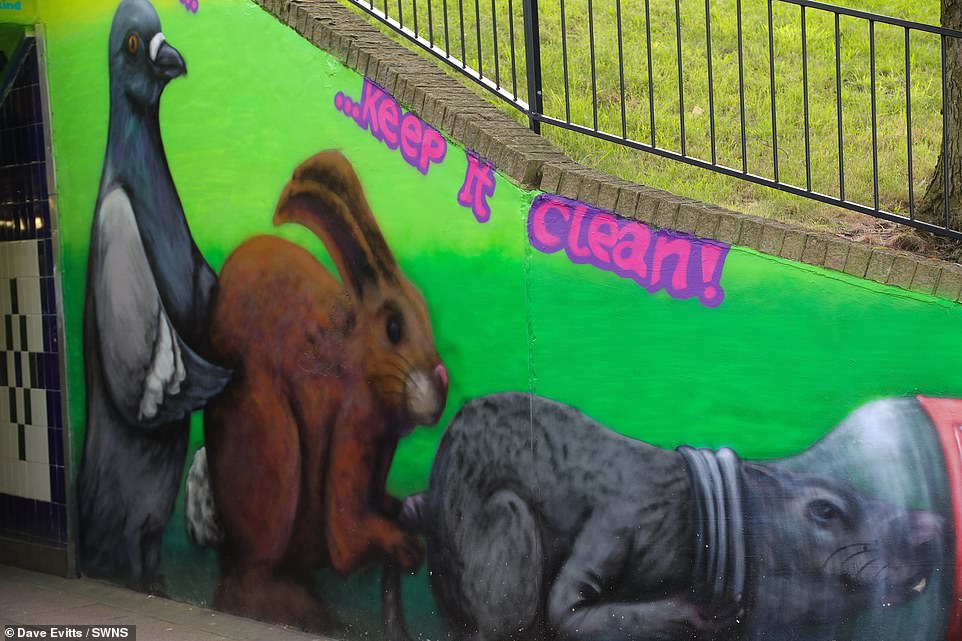 The mural, pictured above, shows a pigeon standing behind a rabbit while the rabbit grabs the tail of a rat. The message above the animals reads: ‘Keep it clean’ 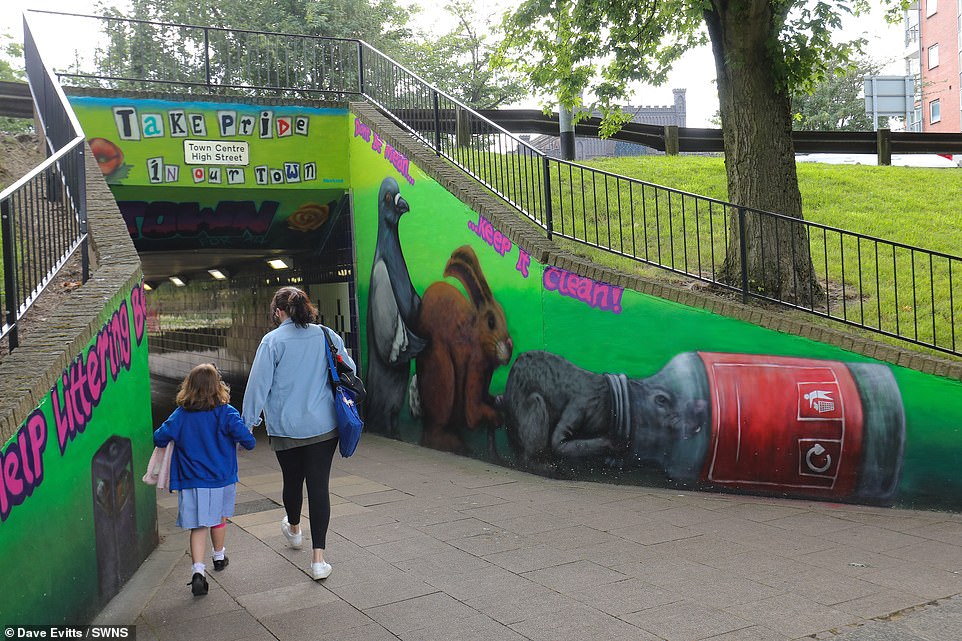 The tunnel under the roundabout in the area where the mural has been painted. Some residents have said it’s hard to explain to children what the painting is of

Some locals have even called on the council to have the mural repainted.

John Howard, 23, said: ‘I couldn’t believe it when I walked past it. It clearly looks like a pigeon humping a rabbit which is doing something odd to the rat.

‘It’s a pity really because the anti-litter message is sort of lost by the unfortunate and rather obscene positioning of the animals.

‘Makes you wonder what sort of offspring they’d have.’ 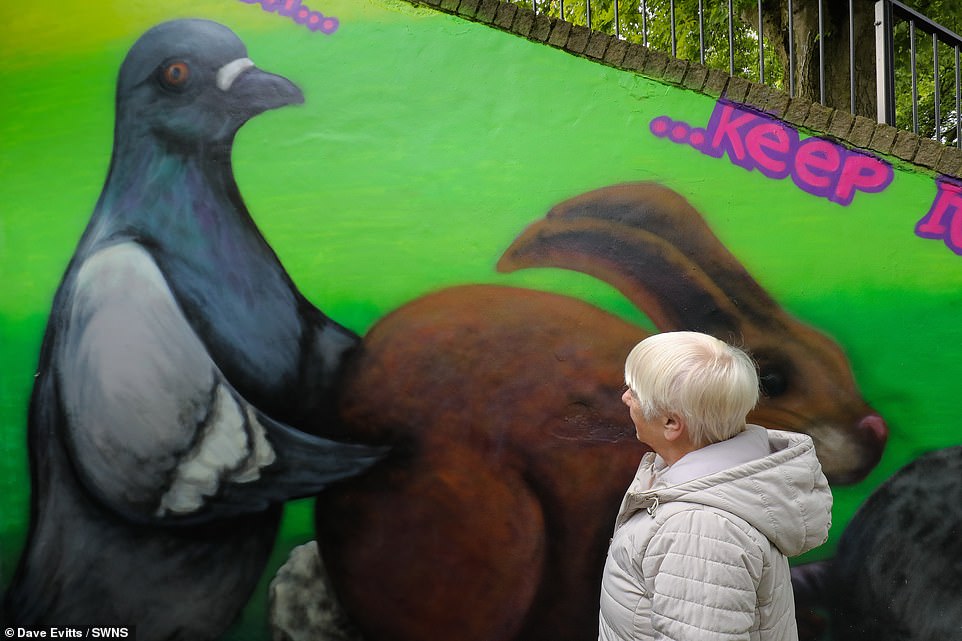 Local resident Joy Smallwood was pictured looking at the mural, which the council paid to be painted on the sunken garden beneath the roundabout 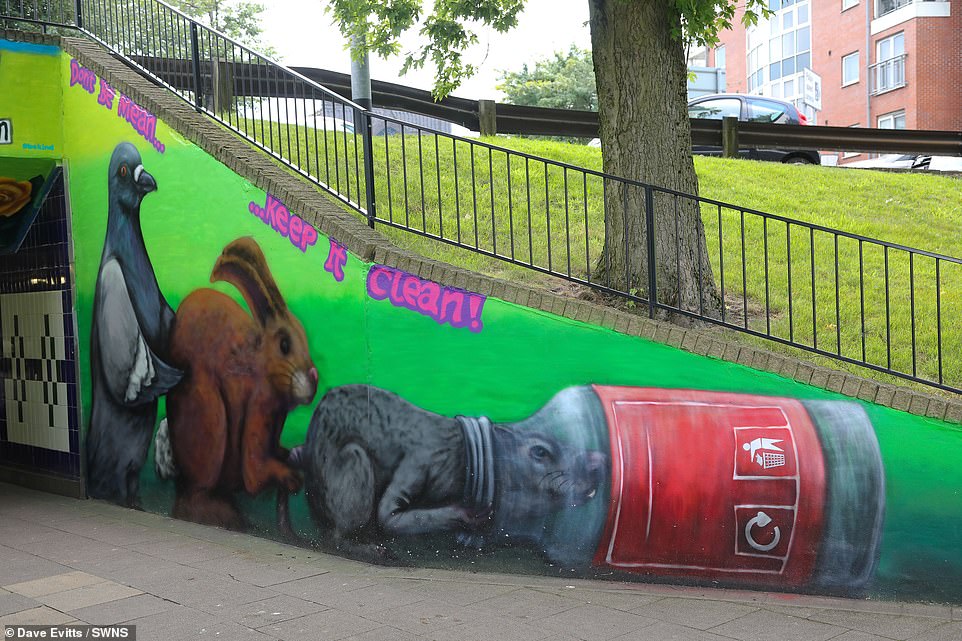 The bizarre mural has gone viral after many residents in the area made jokes about the animals included in the painting which cost £74,000

The mural was painted near a sunken garden underneath Grosvenor Island roundabout in the town.

Above the images of the animals, are the words: ‘Don’t be mean*Keep it clean!’ in bright pink lettering along with the slogan: ‘Take pride in our town’.

Mother-of-two Carole Webber, 34, said: ‘My husband saw the mural and came back to the house almost in tears of laughter.

‘It’s just ridiculous. I think the council should repaint it really. How do you explain pictures like that to little kids?’ 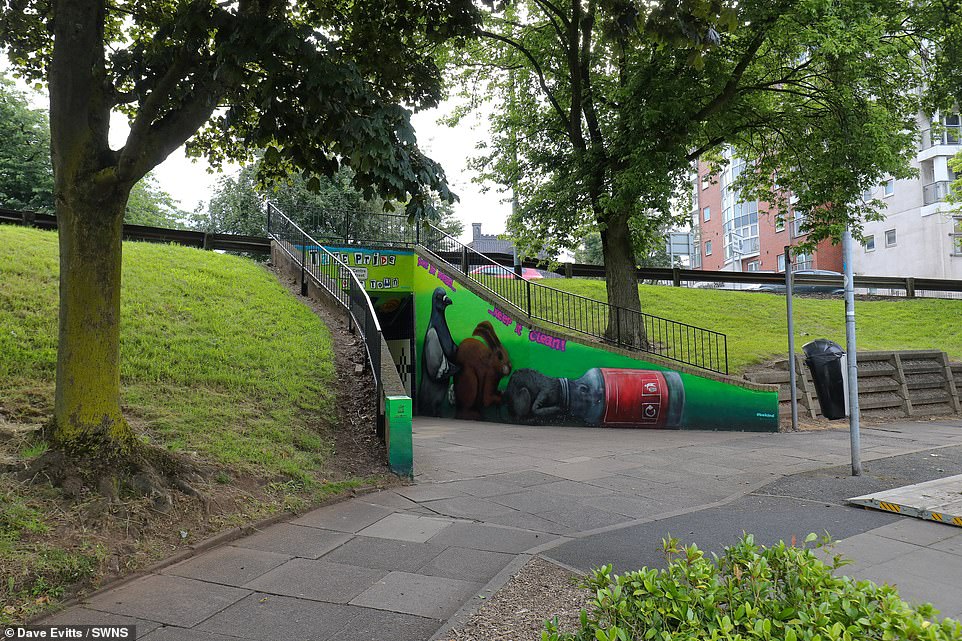 Some local residents have said that the mural is ‘ridiculous’. The mural was painted with money that had been meant to launch a anti-littering message

Pictures of the mural were posted on social media and have since gone viral, racking up more than 10,000 views and shares.

Writing on Facebook, Johnny Shark said: ‘So I’ve got a concept to help launch an anti-litter campaign, it involves daisy-chaining a pigeon, a rabbit and a rat. Who’s with me?’

Twitter user Andes5 added: ‘The soft-drug trolley clearly got passed around a few too many times at that creative meeting!’

The artwork was funded after the council received a total of £74,000 from the Ministry of Housing, Communities and Local Government.

The money was intended to be used to promote anti-littering and improve the public and park facilities for children and families in the town.