This is the shocking moment an ‘idiot driver in a rush’ crashes into the back of a lorry after trying to overtake three vehicles on a blind bend.

Reckless motorist Scott Lowe, 30, dived back into his lane on the A54 between Buxton and Congleton, Derbyshire, when he spotted a lorry heading in the opposite direction.

After pleading guilty to a charge of dangerous driving he has been banned from the road for 15 months, as well as being handed a one year community order and 240 hours of unpaid work at North Derbyshire Magistrates’ Court.

Check this out  Parents outraged after teacher nicknames their son, 14, 'roadkill' after car crash left him disabled

No one was injured in the crash on May 14 this year. 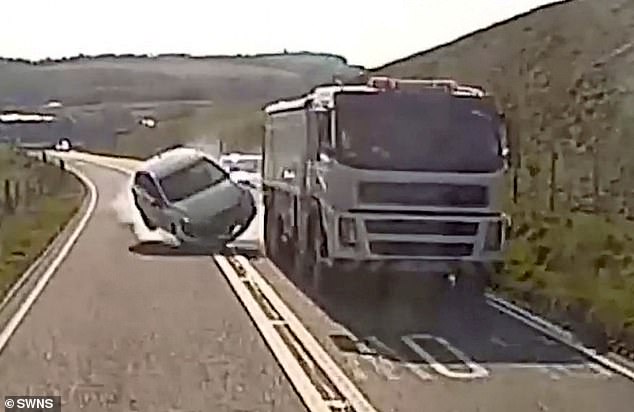 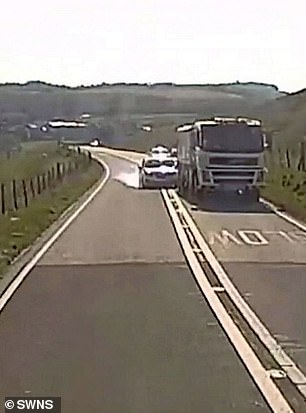 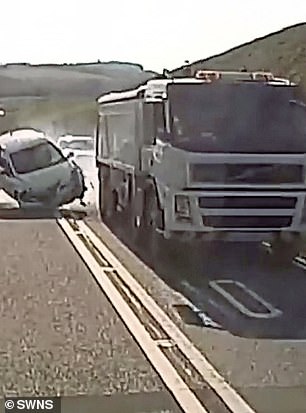 Reckless motorist Scott Lowe, 30, dived back into his lane on the A54 between Buxton and Congleton, Derbyshire, when he spotted a lorry travelling in the opposite direction

Dashcam footage, from the lorry travelling in the opposite direction, shows a white Seat Ibiza car shooting along the wrong lane as he rounds the corner.

Spotting the lorry, Lowe is then seen trying to get back into his lane before slamming into the back of a lorry.

All the vehicles then come to a standstill as the car straddles both lanes and has the hazard lights flashing.

Check this out  Warner Bros. chairman Kevin Tsujihara apologizes for his 'mistakes'

When police arrived at the scene, Lowe told them he was ‘in a rush’ when it happened and had ‘been an idiot’.

The defendant from Brimington, Derbyshire, pleaded guilty to one charge of dangerous driving on July 19. 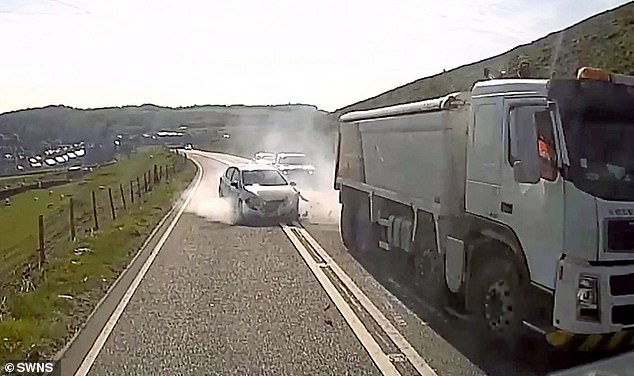 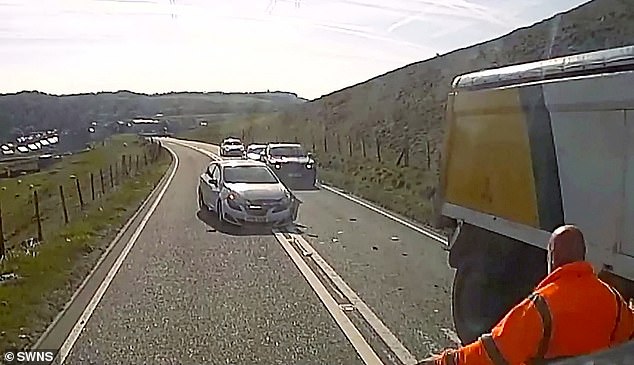 The car was heavily damaged in the collision. No one was injured in the crash

He will have to take an extended test to regain his driving licence.

The court also ordered him to pay £85 in costs and an additional £85 victim surcharge.

PC Kev Harrell, of Derbyshire Police, who was first at the scene of the collision, said: ‘It is only through good fortune that nobody was seriously injured, or even killed, as a result of Scott Lowe’s actions.

‘When I attended the scene I asked Lowe what had happened and he replied that he had ‘been an idiot’, that he was ‘in a rush’ and thought he had space to overtake – clearly he did not.

Check this out  Mesut Ozil’s agent blasts Neuer, Muller and Kroos: ‘they are either naïve or scheming’

‘Scott Lowe took a huge gamble with his own life and the lives of the other road users that morning – all because he was in a rush.

‘Any road can be fatal, however, the A54 has a reputation as being a dangerous route.

‘If people did not drive in a manner similar to that of Scott Lowe then I have no doubt that reputation would diminish.

‘My message to drivers is simple – follow the clear signposting and road markings, drive in a manner suitable for the conditions and leave enough time for your journey.

‘Should you fail to heed that advice then know that I and my colleagues will seek to prosecute all those that put themselves, and others, at risk.’