Spain’s Prime Minister has refused to answer the phone to the Catalan leader who is demanding a new independence vote amid riotous violence throughout the region.

Barcelona’s mayor Ada Colau called for calm over the weekend, saying that ‘this cannot continue. Barcelona does not deserve it,’ as it emerged more than 600 had been injured.

Pedro Sanchez’s government in Madrid said it would not talk to Catalan leader Quim Torra until he ‘and his government condemn firmly and emphatically, without half measures, the violence.’

Torra on Saturday called the Prime Minister ‘irresponsible,’ with local media reporting that Sanchez had thrice refused to answer the phone to Torra.

Scroll down for video. 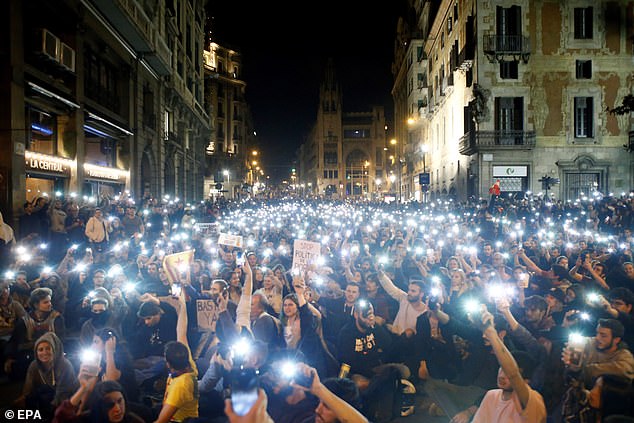 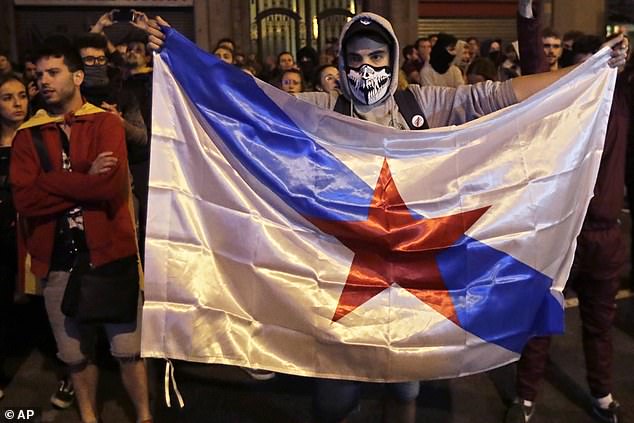 A protestor holds a Estreleira, a Galician left-wing nationalist flag, during a Catalan pro-independence demonstration in Barcelona 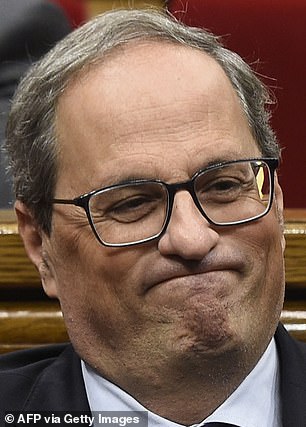 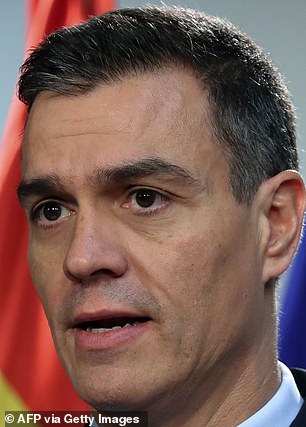 Torra said in a statement he has always condemned violence and reiterated that he will continue to defend Catalonia’s right to self-determination.

Torra has stated he aims to make the region independent from Spain by 2021.

The streets of Barcelona and other Catalan cities have been rocked by protests since Spain’s Supreme Court sentenced nine separatist leaders last Monday to jail terms of up to 13 years for sedition over the failed 2017 independence bid.

Demonstrators have set fire to cars and garbage bins and thrown rocks at police, who have responded by using their batons and firing rubber bullets.

Barcelona Mayor Colau said a policeman and a protester remained in a critical condition, adding that ‘several people’ had been blinded in one eye by police rubber bullets.

Interior Minister Grande-Marlaska told reporters earlier in the day that 288 police officers had been hurt in the clashes, 267 police vehicles damaged and 194 people arrested. Several hundred protesters were also hurt.

‘The riots are diminishing, but we are working on stopping them altogether,’ said Grande-Marlaska. 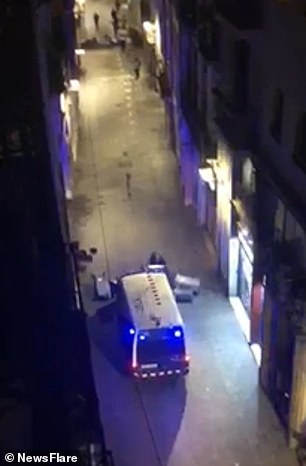 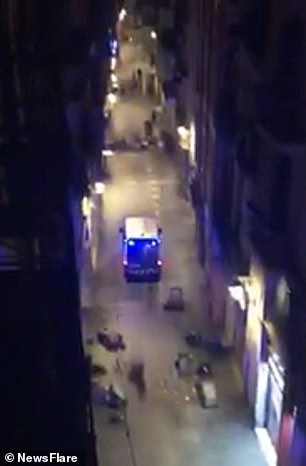 There is a makeshift barricade up ahead of the van which appears to have been made out of dustbins and rubbish bags.  The van approaches the blockade before ploughing through it without hesitation, scattering debris across the road 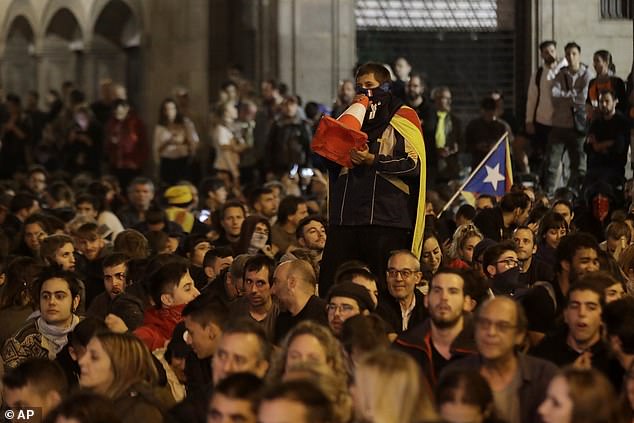 Independence is a highly divisive issue in Catalonia, which is Spain’s wealthiest region and has 7.5 million inhabitants.

A poll in July showed backing for secession at its lowest level in two years, with 48.3 per cent of people against and 44 per cent in favour.

One of the most prominent figures against self-determination, Albert Rivera, head of the pro-unionist Ciudadanos party, staged a counter-protest on Sunday and called for an end to the violence.

Addressing hundreds of flag-waving supporters, Rivera accused Spain’s caretaker Socialist government of not doing enough to stop the chaos in one of Europe’s tourist hotspots. 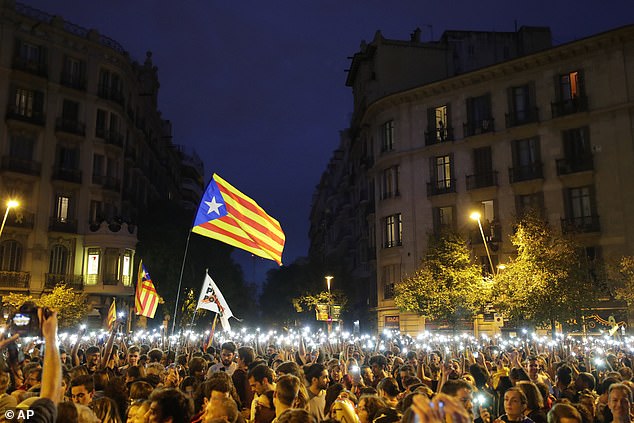 One large crowd blocked a road close to the Spanish government headquarters in Catalonia, throwing dozens of sacks of rubbish in front of stationary police vans. Pictured: A Catalan independence flag rises above a crowd in Barcelona 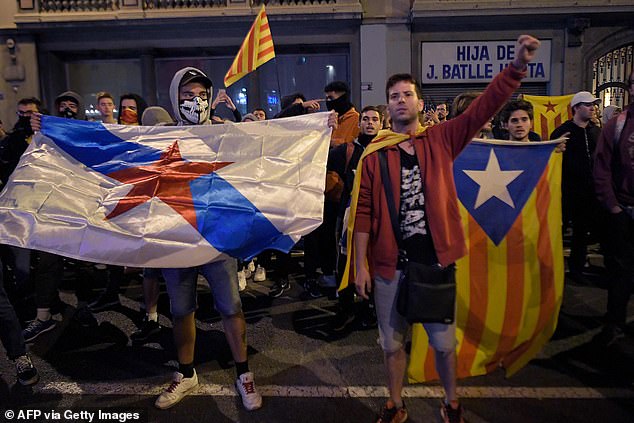 ‘People can’t take their children to school, they can’t open their businesses,’ Barcelona-born Rivera said. ‘We need a Spanish government that protects the weak.’

City officials estimate that the rioting has caused 2.5 million euros (£2.2 million) worth of damage.

‘There are more of us Catalan Spaniards than separatists. It’s important that people see that not everyone is in favour of independence,’ said Martina Gonzalez, a 58-year-old cleaner who had a Spanish flag draped over her shoulders.

Pro-independence leaders staged an illegal referendum in 2017 and then declared they were breaking away from Spain.

The Spanish government of the time immediately seized control of the Catalan administration and the ringleaders were put on trial. 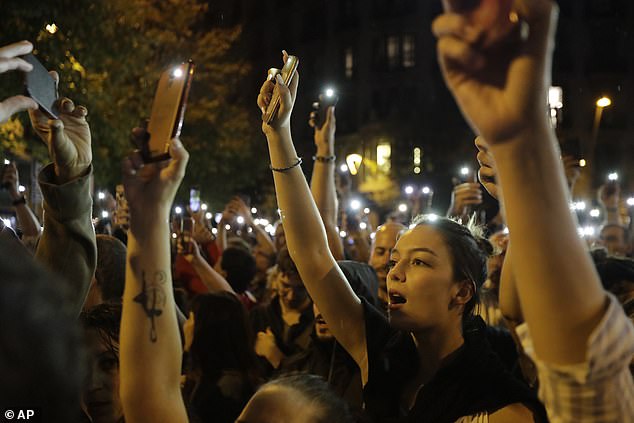 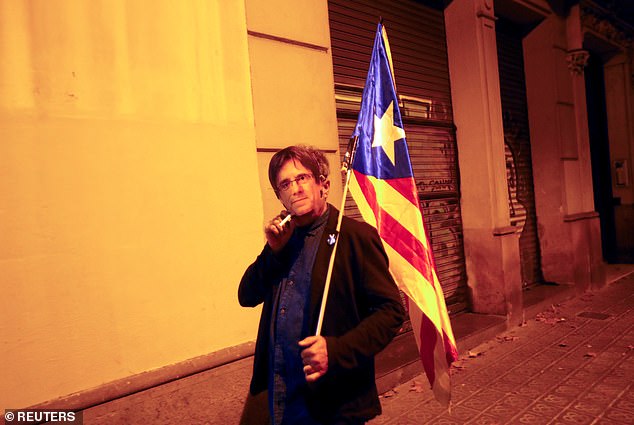 The Supreme Court on Monday found nine politicians and activists guilty of sedition and sentenced them to up to 13 years in jail, triggering street unrest.

The Catalan question has dominated domestic politics in recent years and was instrumental in triggering parliamentary elections in April, which gave no single party a majority.

The Socialists have called a national election next month, but a poll released on Thursday suggested parliament would remain split.

The survey found that support for Ciudadanos was plunging, suggesting Rivera is fighting for political survival.