They excitedly welcomed their son Lennox Ryder into the world last week.

And Tara Rushton and Cooper Cronk looked every inch the doting parents as they stepped out with their bundle of joy for the first time on Monday.

The Fox Sports presenter, 34, and NRL star seemed smitten as they bundled Lennox into a baby carrier and enjoyed a sun-soaked stroll around Sydney. 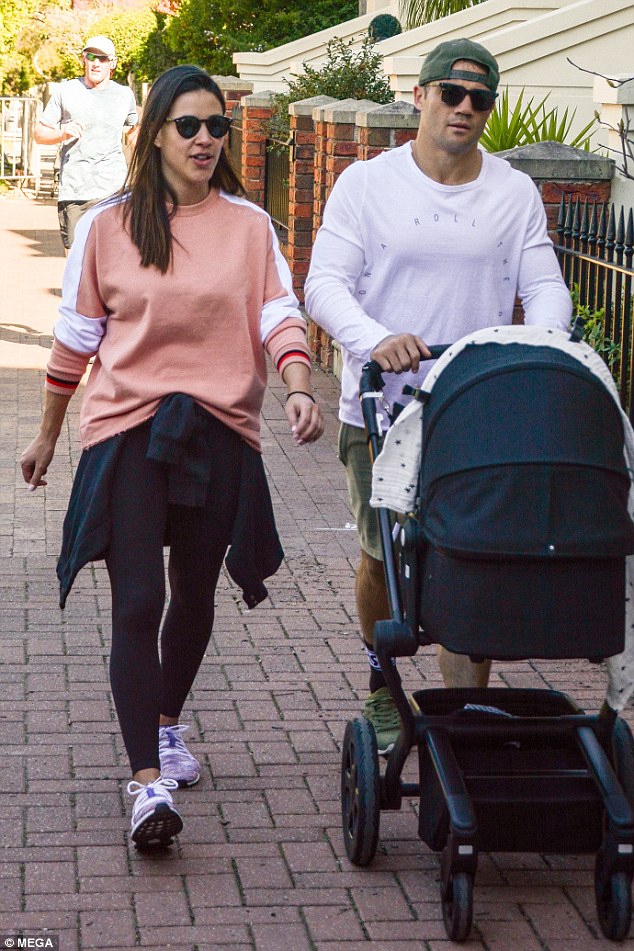 Tara dressed down in a simple pink sweater and black skintight leggings, which she teamed with lilac trainers.

Tara revealed the couple’s happy news on Instagram page on Sunday evening, telling her followers that she and Cooper Cronk, have called their bub Lennox Ryder Cronk.

‘Lennox Ryder Cronk, You came into the world this week, and have blown our hearts wide open. We are in awe,’ she wrote alongside a picture of cute blue baby booties emblazoned with the words ‘Baby Cronk’.

It appears that the couple’s first child came a week or so later than expected.

Earlier this year, Tara revealed that she was due to give birth to her first child during the 2018 FIFA World Cup.

Check this out  A-level student, 19, is convicted of importing deadly Glock 17 pistol

‘We feel totally blessed to be having a little bubba. It’s our World Cup baby because it will be born during the World Cup,’ she gushed to BW Magazine at the time.

Last year, Cooper defected from the Melbourne Storm to the Sydney Rosters in order to be closer to Tara.

The high-profile pair tied the knot in a star-studded ceremony on Sydney’s Northern Beaches in December 2017.

The pregnant TV personality told The Daily Telegraph back in April her baby bump was expanding at an ‘exponential rate’, meaning she needed constant wardrobe fittings for work.

‘I have been growing at an exponential rate,’ Tara told the publication.

She explained she has been trying on dresses for on-air appearances but then they no longer fit a week later.