An RAF pilot who crashed on D-Day and was hidden from the Nazis for three months by brave French villagers has been honoured in a ceremony in Normandy.

Warrant Officer George Martin was seriously injured when his Hawker Typhoon was shot down on June 6, 1944, and was found hanging from a pear tree in St Pierre des Ifs, Normandy, after bailing out.

His relatives attended a moving ceremony in the French village to see the unveiling of plaque in his memory.

The service was organised by Marie Antionette Lepetouka, whose parents risked their lives to care for the airman, and Michel Picquot, who as a nine-year-old, witnessed the plane crash. 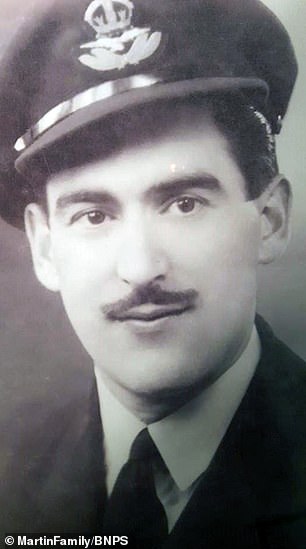 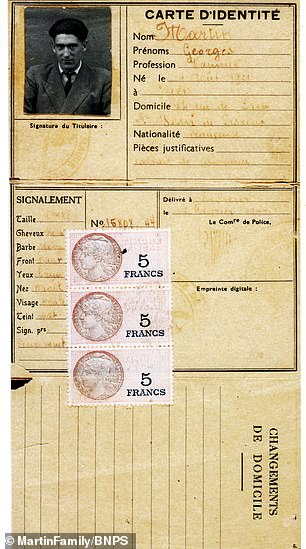 Second World War RAF pilot George Martin, left, was honoured with a plaque in the French village where he crashed on D Day and was hidden for three months from the Nazis. Villagers put him in touch with the French Resistance who gave him a false ID, right 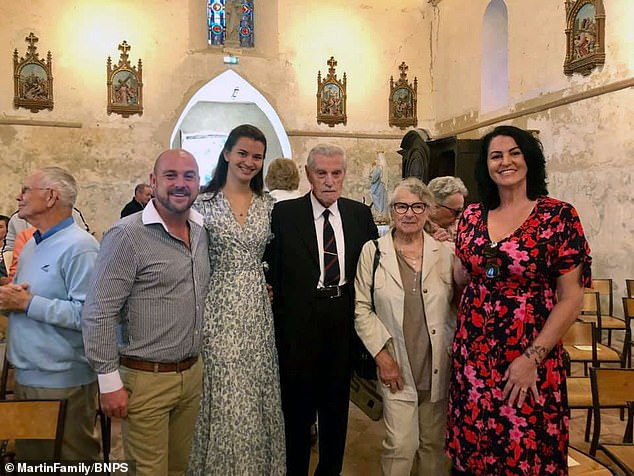 The pilot, who was shot down in his Hawker Typhoon, was found hanging in a tree in St Pierre des Ifs, Normandy. He was remembered at a service by Marie Antionette Lepetouka (second right), whose parents risked their lives to care for the airman, and Michel Picquot (centre), who as a nine-year-old, witnessed the plane crash. Also at the service were Mr Martin’s granddaughter Georgia Smit, right, her daughter Rocci, second left, and her brother Jason, far left

Check this out  In China, yellow robots deliver snacks to your home 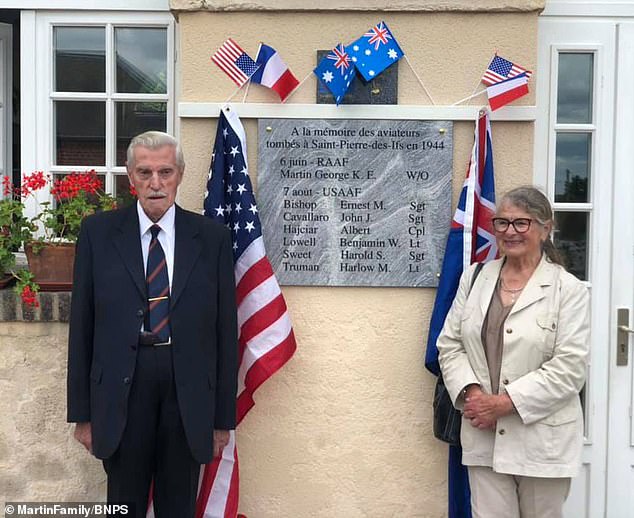 Pictured are Mr Picquot, left, and Mdm Leteouka, right, with the plaque bearing Warrant Officer Martin’s name alongside US troops

W/O Martin was found on June 7 by a farm worker who cut him down and alerted other villagers.

He was then covered in tarpaulin and driven by Mr Picquot’s mother to a remote barn where he hid for a few days before being taken in by the Lepetouka family.

With the help of the French Resistance, he was given a false identity and put up in a spare room to recover from his injuries.

Incredibly, during his three month stay, members of the SS arrived and annexed part of the large farmhouse to use as an office, without ever realising the man in the spare bedroom was a downed RAF airman.

Had they discovered W/O Martin he would have been captured and interrogated and the Lepetouka family shot or taken to a concentration camp.

The unveiling of the plaque came about after a British historian Andrew Boakes stumbled upon the cockpit panel of W/O Martin’s Typhoon plane for sale in an antiques shop in Normandy. 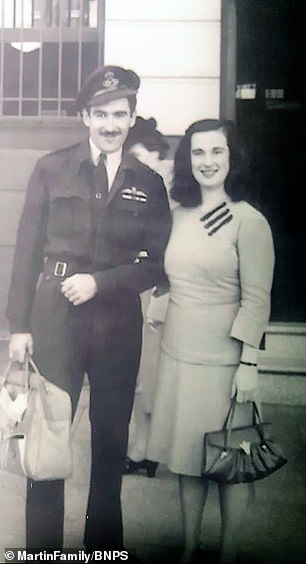 W/O Martin married sweetheart Phyllis, pictured, after the war and they had three children before moving to Australia in 1952

From there he traced the farmhouse where Marie Antionette Lepetouka, who was 12 in 1944, was still living. He put her in contact with W/O Martin’s granddaughter, Georgia Smit.

The service also recognised the bravery of the villagers of St Pierre des Ifs for hiding several airmen during the Second World War.

Mrs Smit, 52, said: ‘It was an amazing day with a church service first and then the ceremony at the town hall where we unveiled the plaque.

‘Almost everybody in the village attended. It was very emotional. The bravery of the local villagers including the Picquots and the Lepetoukas was recognised.

‘We also visited the pear orchard my grandfather dropped into.

‘It was a very humbling experience. These people risked their own lives to save my grandfather yet they were so grateful to us and made such a fuss when we were there to thank them.’

Mr Boakes, of the Hawker Typhoon Preservation Group which is working to build and fly the world’s only typhoon, said: ‘It is quite remarkable that the front cover of a Typhoon in a junk shop led to this event.

‘It was very pleased to have played a part in the meeting between the two families.’

W/O Martin served in 609 Squadron and was stationed at RAF Manston near Margate, Kent, in the build up to D-Day

He met his future wife Phyllis Goble at a New Years Eve party in December 1943.

She served in the Women’s Auxiliary Air Force (WAAF) and worked as a radar plotter in Kent.

She often watched for W/O Martin’s plane returning on the radar scree from raids across the English Channel and also talked to him over the radio. 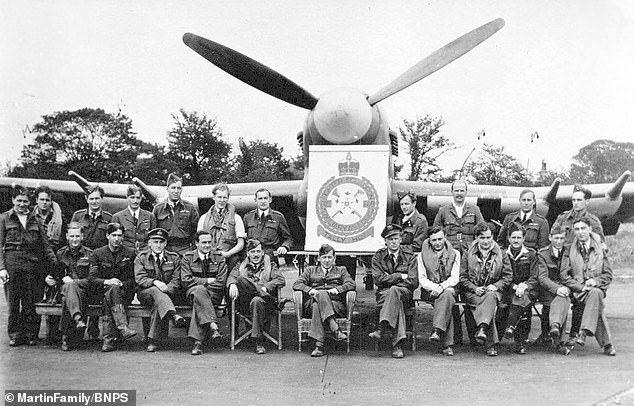 But when he failed to return from the D-Day sortie Phyllis and his family spent three months fearing he had been killed.

He was eventually liberated on August 24 when advancing Canadian troops reached the village.

W/O Martin received the Distinguished Flying Cross but never flew operationally again in the war.

After the war the couple had three daughters in England before they moved to Australia in 1952.

He worked as a freelance pilot flying freight. He was also the personal pilot of the Australian racing driver Sir Jack Brabham before an accident ended his flying career.