A block of apartments has been fashioned from 140 shipping containers, looking like a scene from a Steven Spielberg sci-fi movie, in Johannesburg, South Africa.

The New York design studio, Lot-ek, say it is a ‘response to the post-apartheid generation’s desire to repopulate the city’s downtown through new models of urban living.’

The containers are reminiscent of the ‘stacks’ in Spielberg’s film Ready Player One.

The movie, set in a futuristic Columbus, Ohio, features containers stacked up in the slum area of the city. 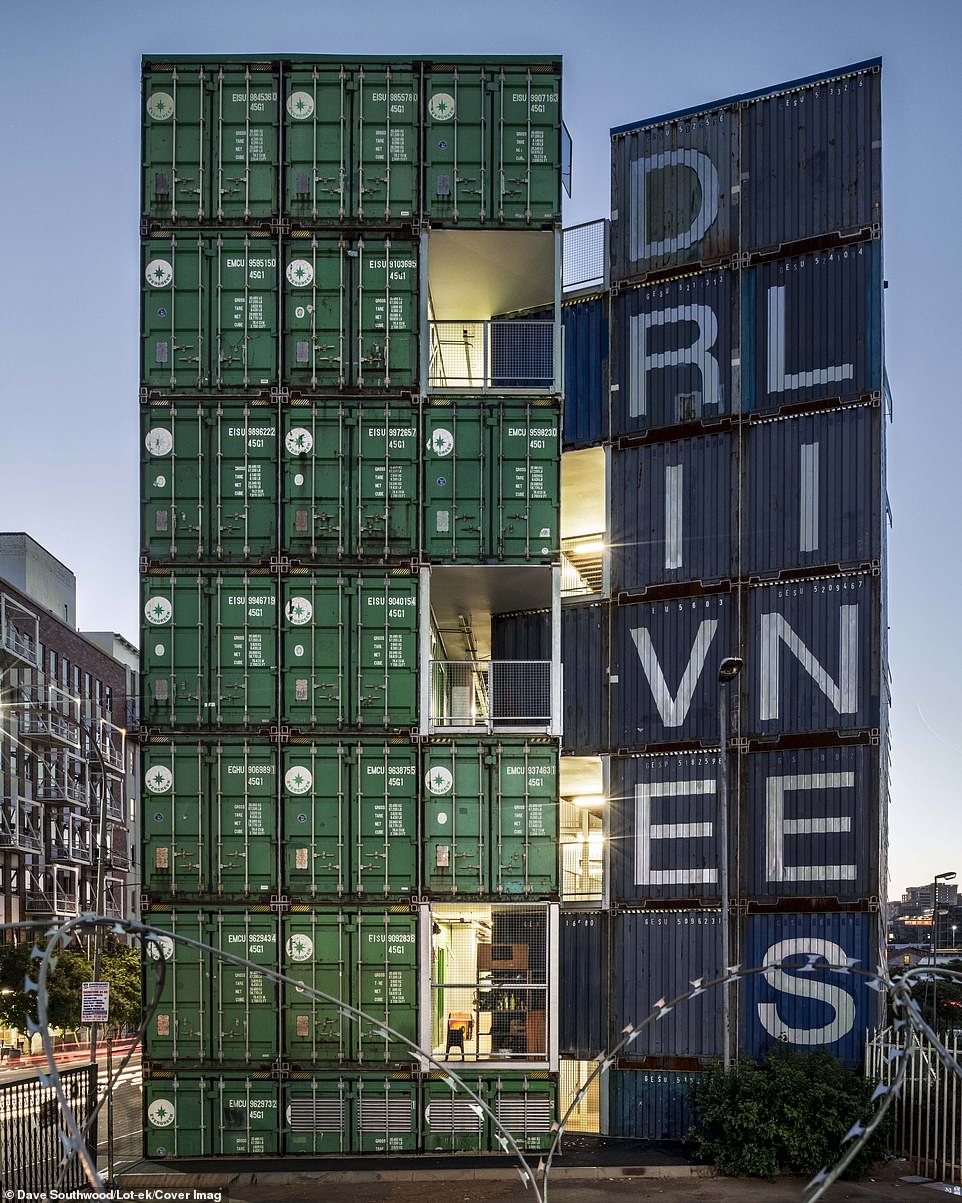 The gritty, shabby-chic style is embraced by the developers with a shot taken of the apartments through razor wire

The ‘stacks’ in Steven Spielberg’s 2018 film, Ready Player One, where a teenager in a futuristic Columbus, Ohio, hopes to win big and leave his life in the slums

The orphaned teenage protagonist, Wade Watts played by Tye Sheridan, dreams of winning a virtual reality gaming contest so he can leave his container home.

The shabby-chic containers in Johannesburg feature the same stacked up effect, as well as the outboard railings and steelworks like the ‘stacks.’

They feature diagonal cuts which makes space for windows, partitions within apartments and balconies.

Lot-ek explain: ‘Embracing the triangular geometry of the site, the building is conceived as a billboard where two separate volumes of residential units are hinged at the narrow east end of the lot, framing the social space of the open interior courtyard. 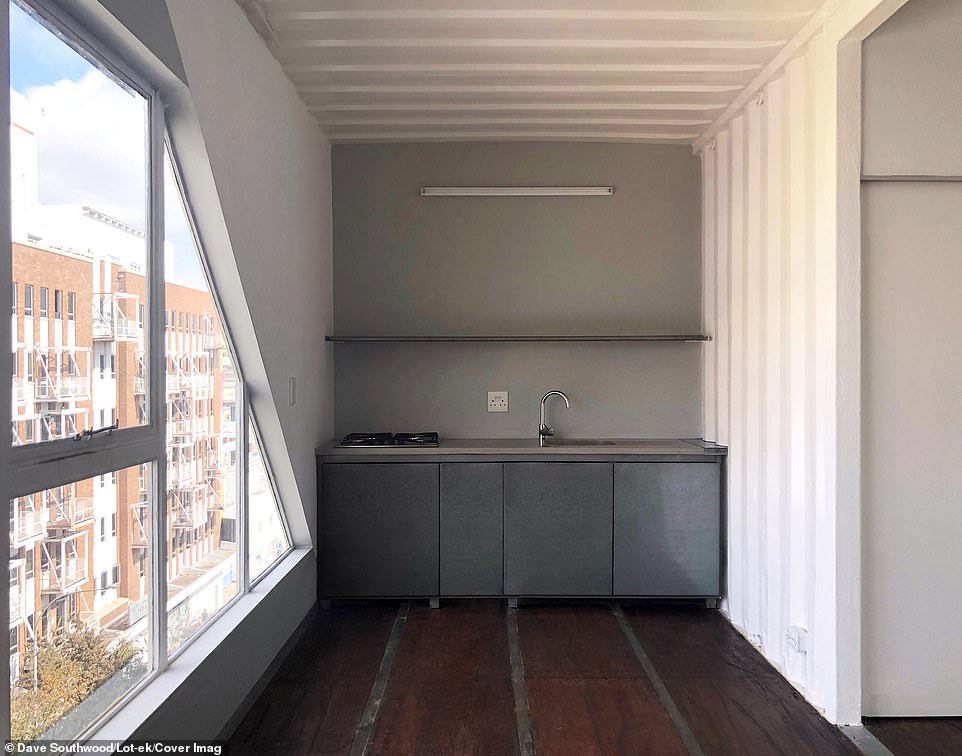 A small kitchenette in the new development, where the corrugated steel of the container has been left to show on the interior 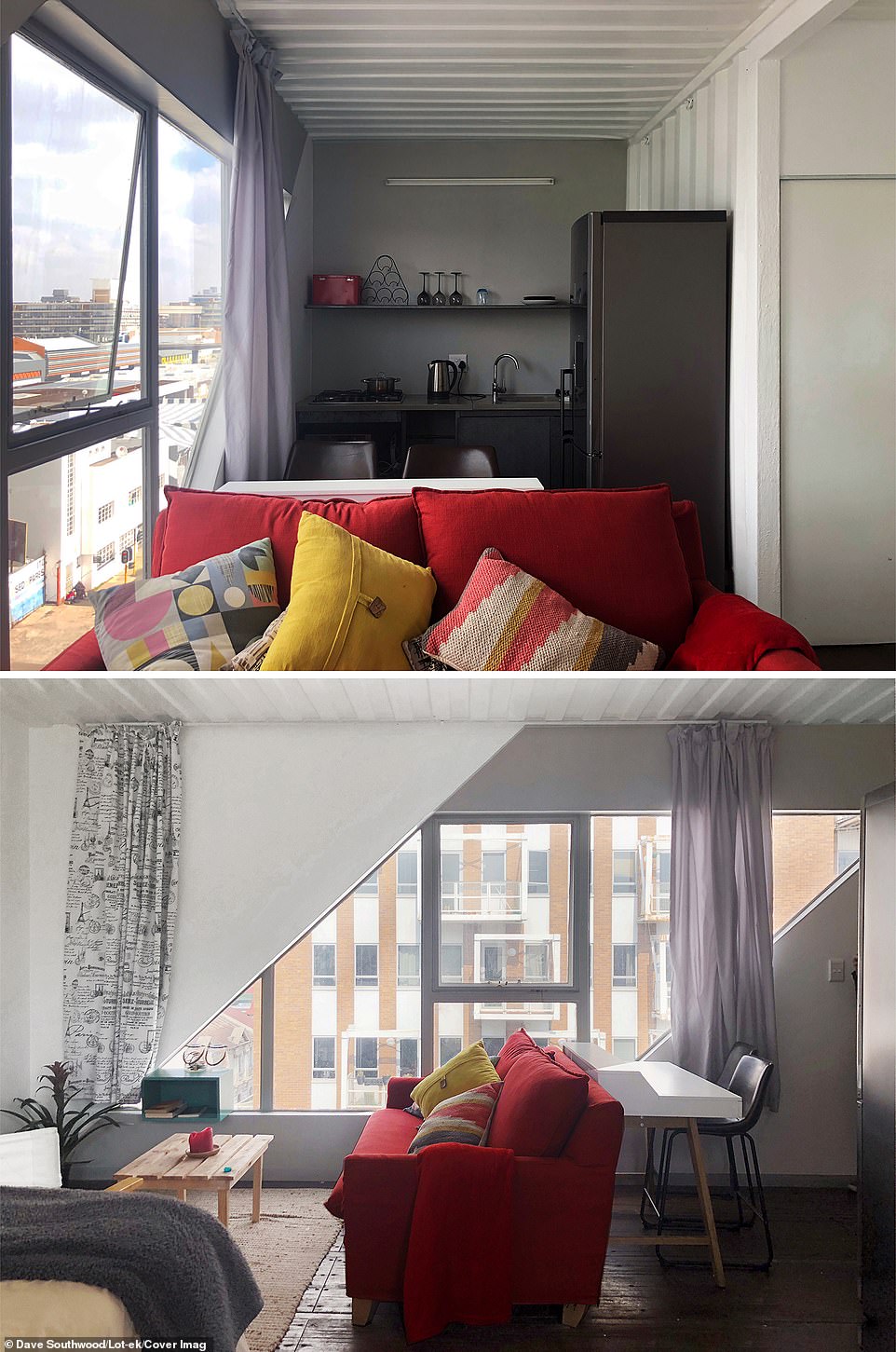 The broad diagonal cuts in the sides of the containers make space for large windows, as well as adding to the overall geometric pattern of the structure 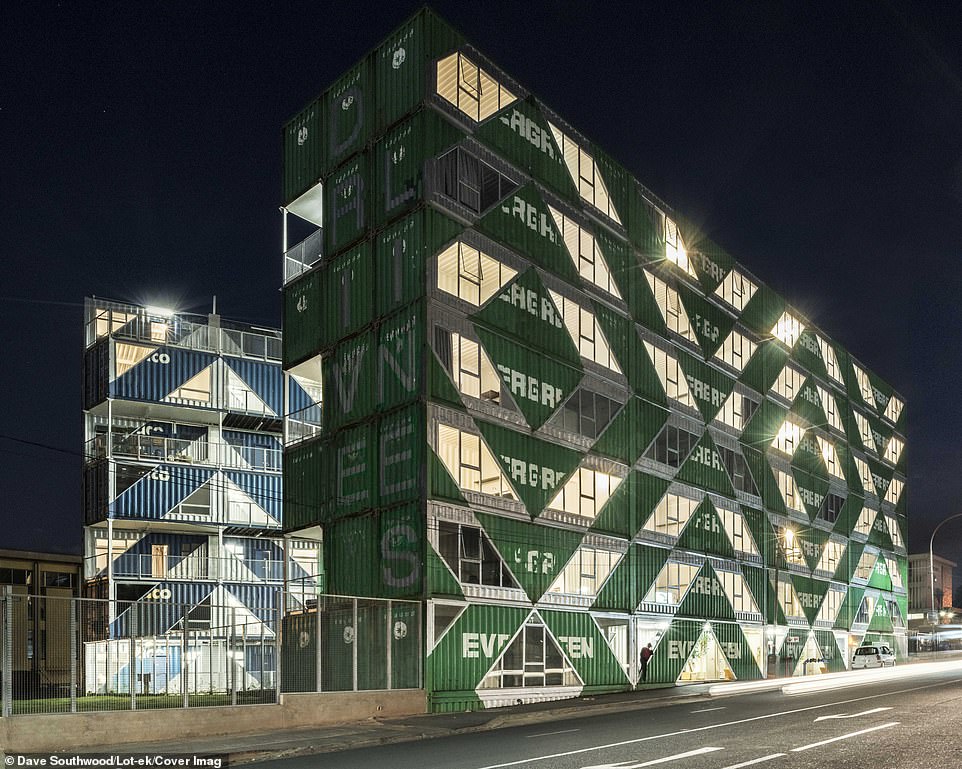 The use of shipping containers in design has become popular recently and an individual used container can be bought for £1,500

‘As in a billboard, the building’s outer facades are straight and flush with the lot line while the facades in the inner courtyard are articulated by the staircases, the elevator tower and the bridges connecting all levels, and by the open circulation paths activated by the units spillover onto their outdoor space.’

Check this out  Juul pods almost killed me: 18-year-old college student's lung COLLAPSED after vaping for a year

The block is found in Maboneng, an area which has recently been rejuvenated by urban redevelopment.

The builders say their innovation can contribute to the area’s reactivation and re-imagining. 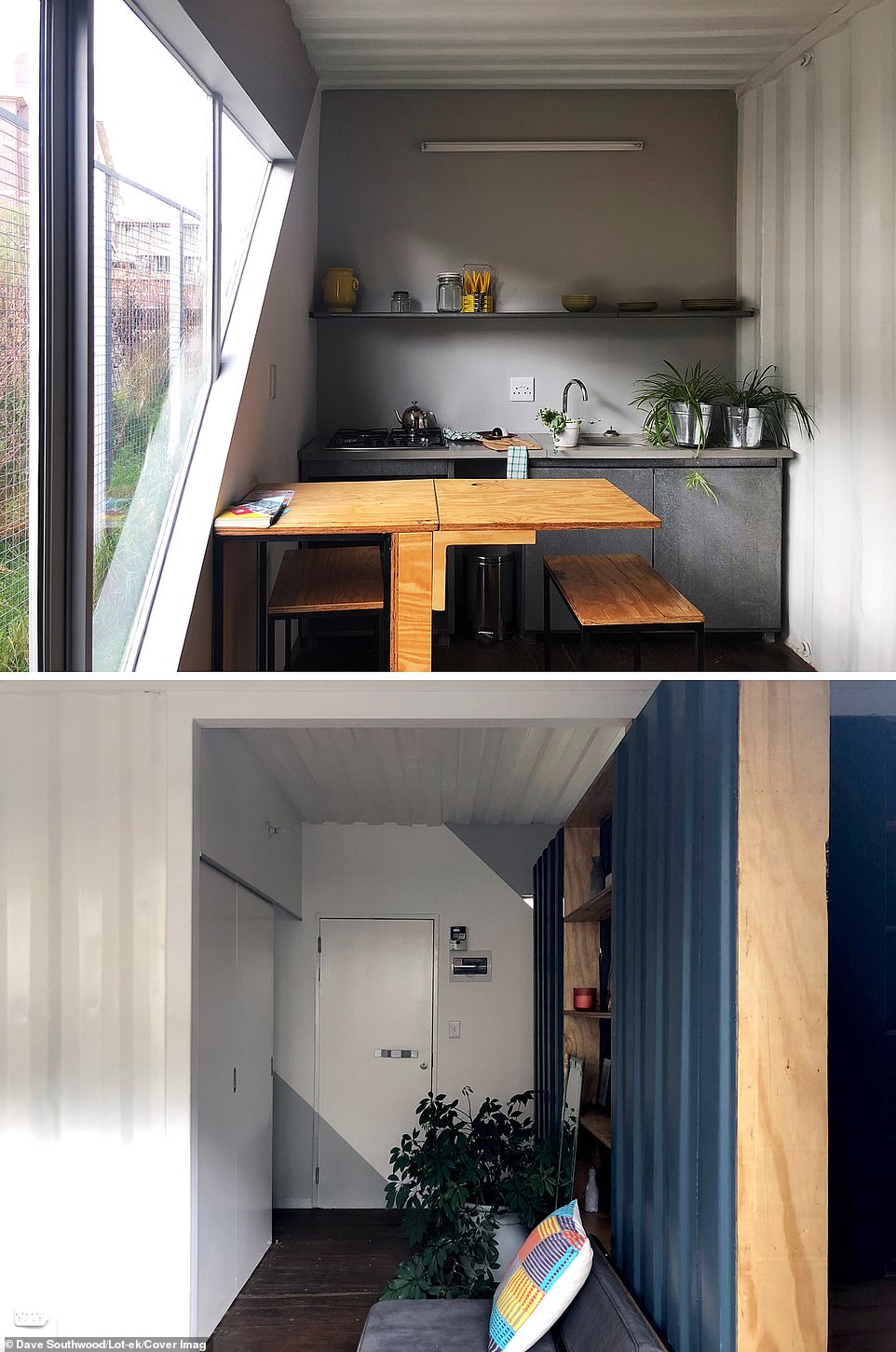 The apartments range from 300 sq ft to 600 sq ft in size, and are situated in the up-and-coming area of Maboneng in Johannesburg 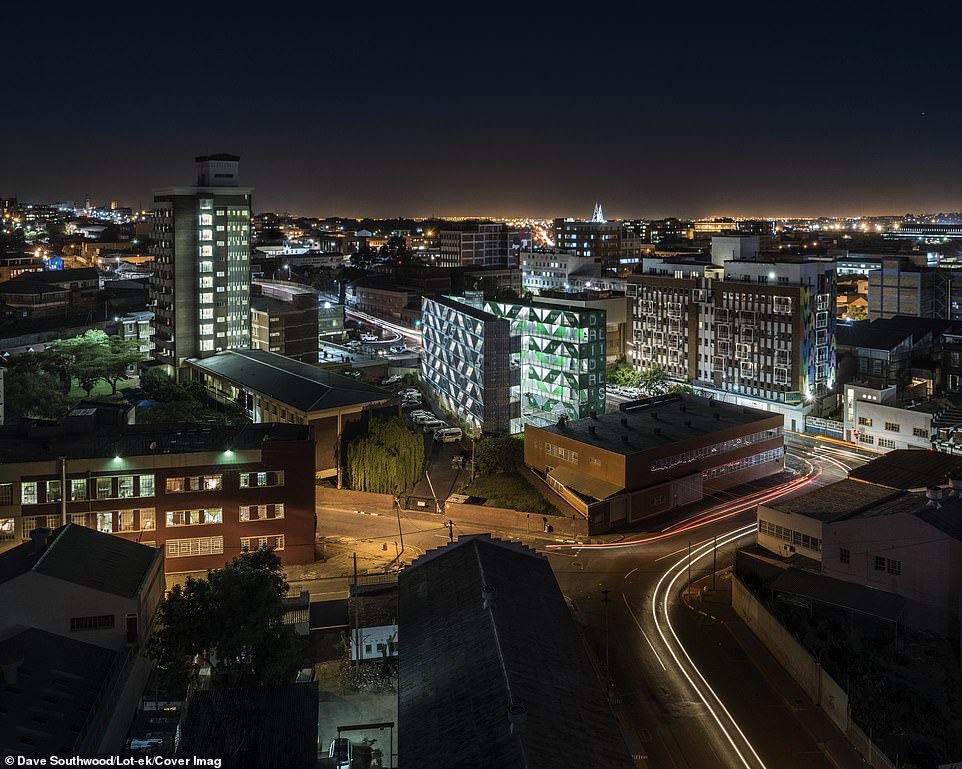 The triangular shape of the block as seen from above, creates an imposing spectacle on the Johannesburg night sky 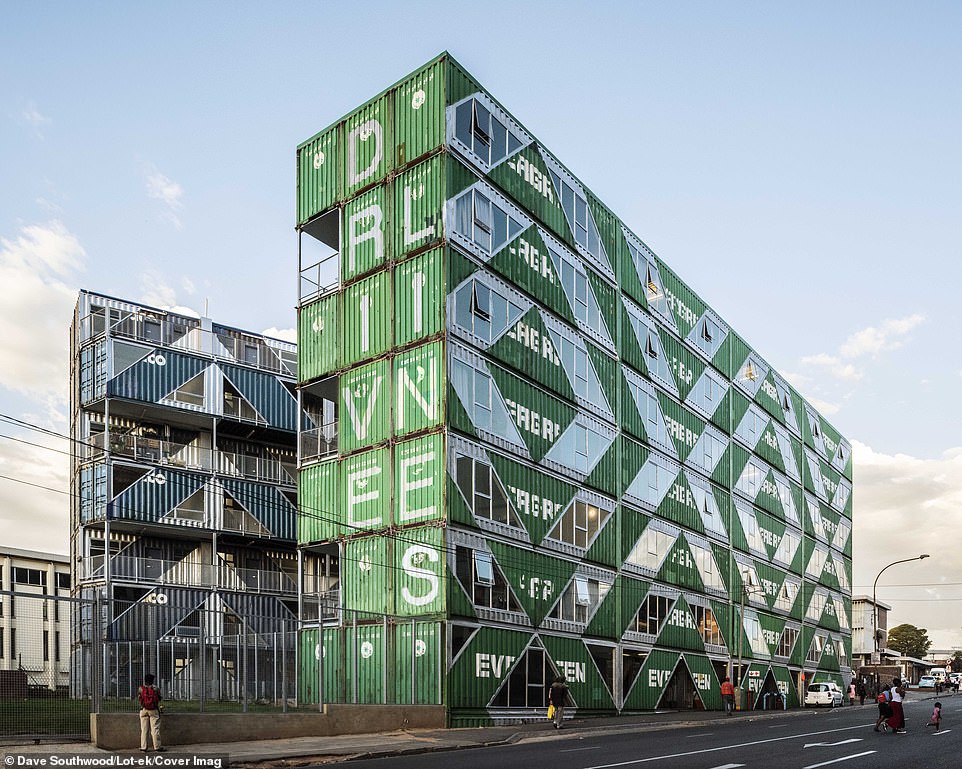 Containers’ surging popularity in design can no doubt be put down to the market’s demand for up-scaling, which rather than building from scratch, allows for builders to lower their carbon footprint

They were stacked and cut on sight, and buyers will be able to have the outsides painted in a colour of their choosing.

The block surrounds a courtyard with a pool and garden area for residents, as well as shops. 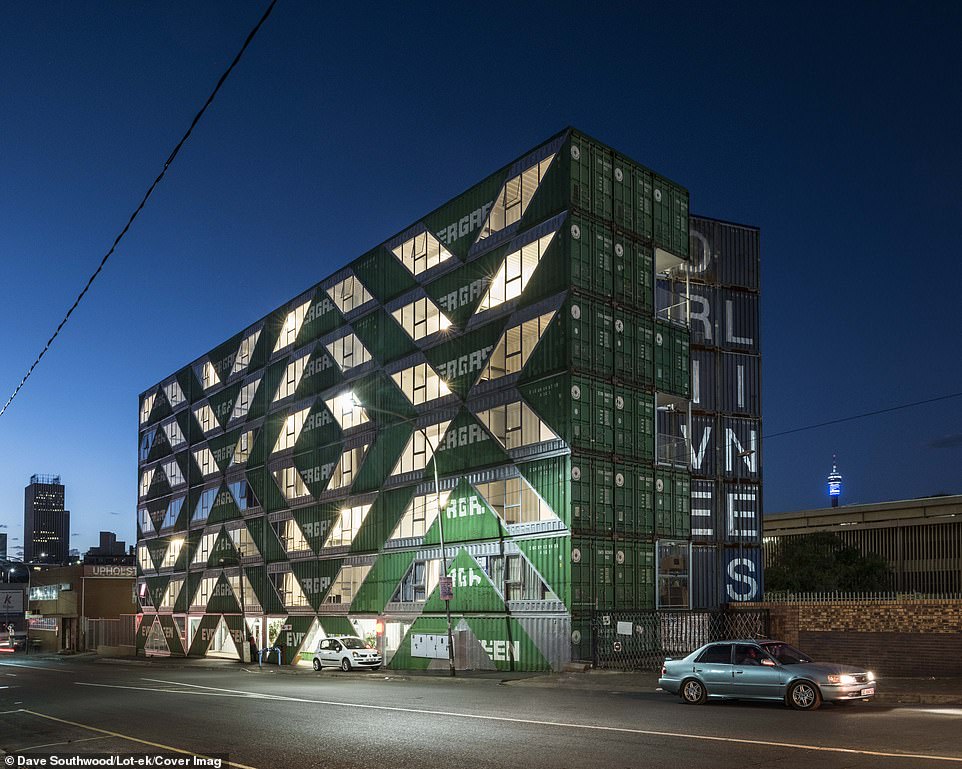 All of the containers feature balconies on the interior side facing the courtyard, with large windows onto the street 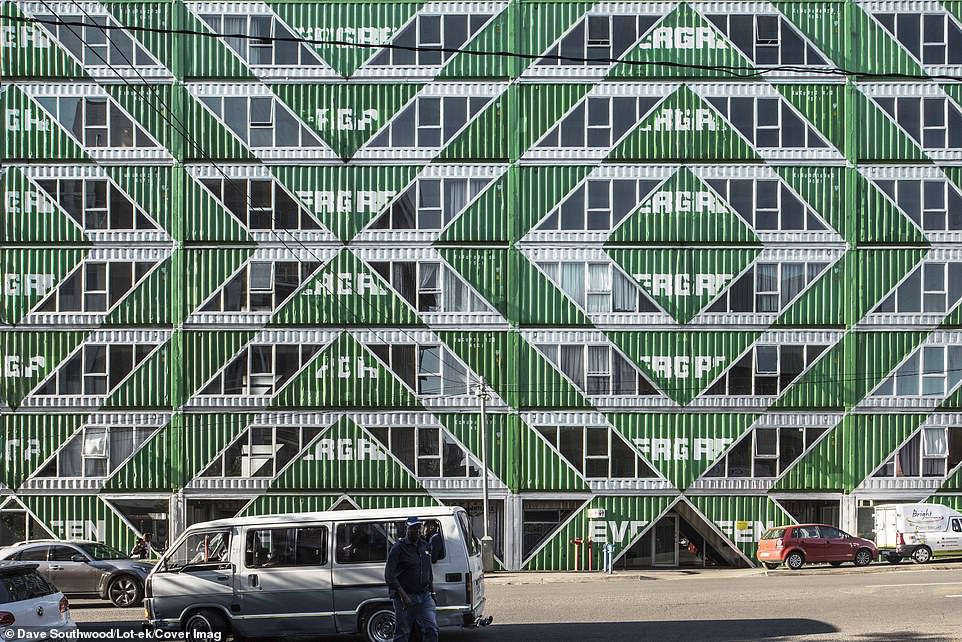 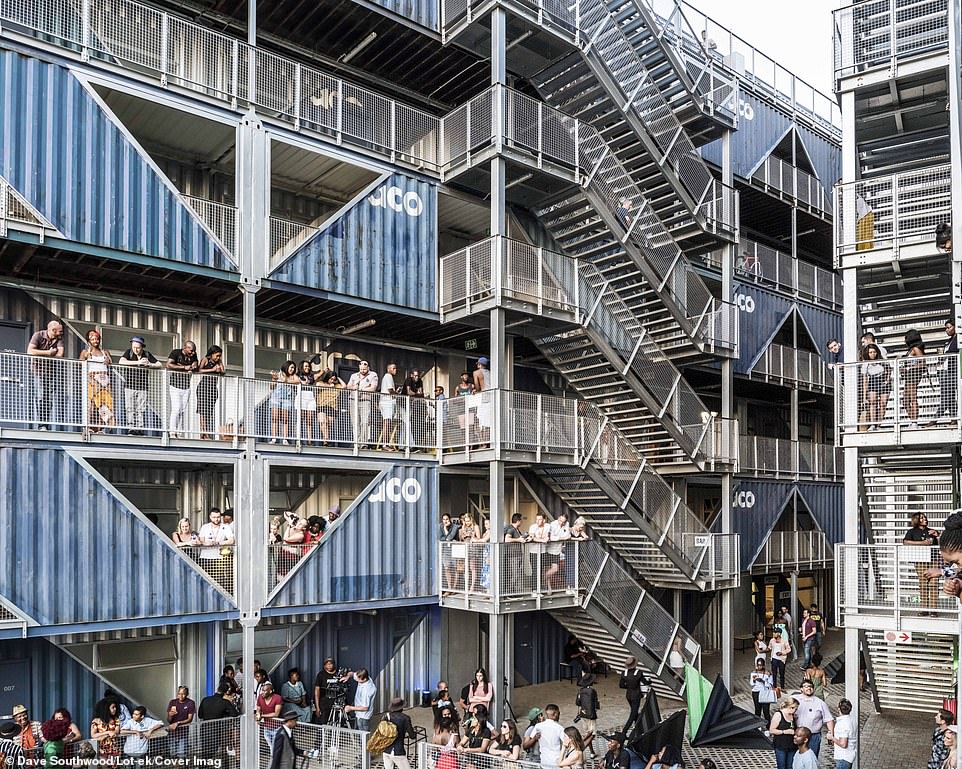 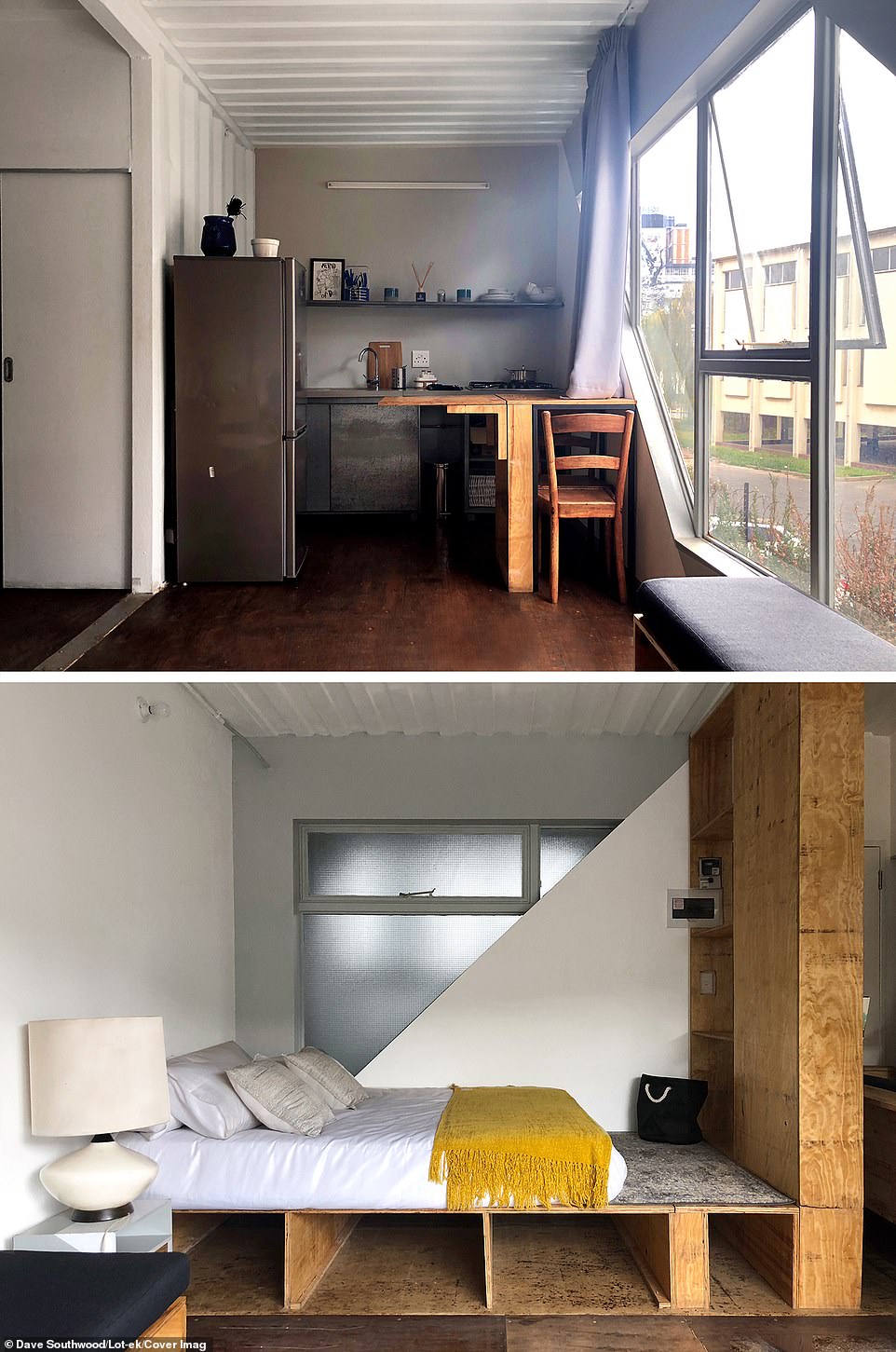 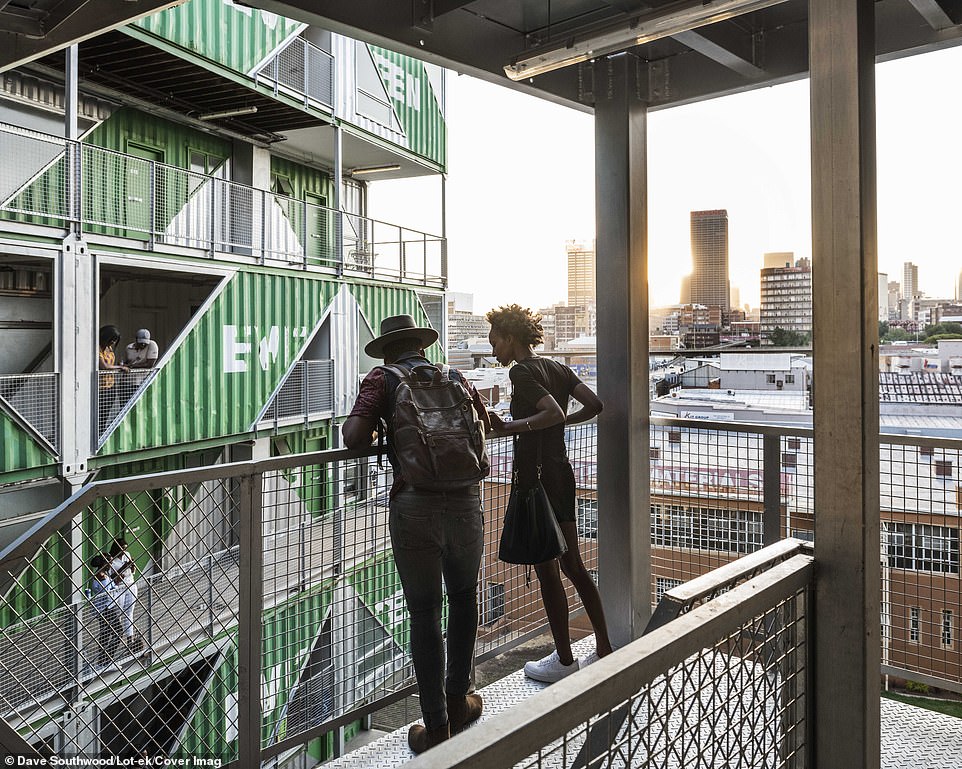 Its surge in popularity can no doubt be put down to the market’s demand for up-scaling, which rather than building from scratch, allows for builders to lower their carbon footprint.

In London, Brixton’s ‘Pop’ is a similar project which uses shipping containers as bars and restaurants.

The container block, known as Drivelines Studios, are stacked on six levels and vary from 300 sq ft to 600 sq ft.