The Conservatives have opened up a 15-point poll lead ahead of the Brexit deadline and possibly just weeks from a general election, new figures revealed today.

Boris Johnson’s party hit 37 per cent in YouGov’s latest tracker, up two per cent in a week. In contrast Jeremy Corbyn’s opposition party languishes unchanged on 22 per cent.

Britain could go to the polls before Christmas if there is a Brexit deal or a delay that keeps Britain in the EU until January, with Mr Corbyn keep for it to happen once a No Deal Brexit is avoided.

But the YouGov figures today make difficult reading for the veteran left-winger.

As well as Labour’s stagnant performance he also fell further behind Mr Johnson in terms of who the public feels would be the best prime minister.

Mr Johnson was the choice of 43 per cent of voters in the latest YouGov tracker, up five from 38 per cent a month ago.

Check this out  Bruins' Bergeron hopeful to be ready for opener

Mr Corbyn  is languishing on 21 per cent, down one per cent in the same period. 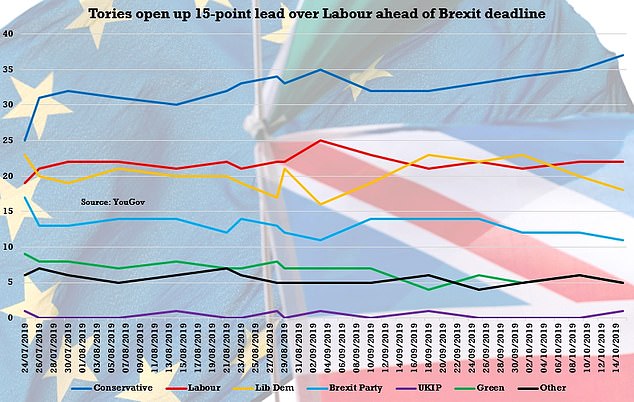 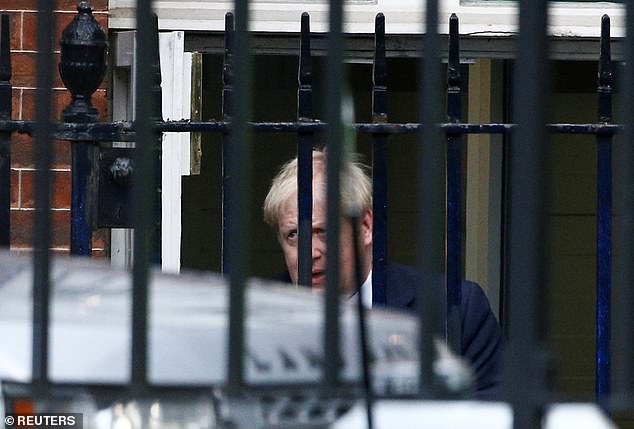 Boris Johnson’s party hit 37 per cent in YouGov’s latest tracker, up two per cent in a week. In contrast Jeremy Corbyn’s opposition party languishes unchanged on 22 per cent. 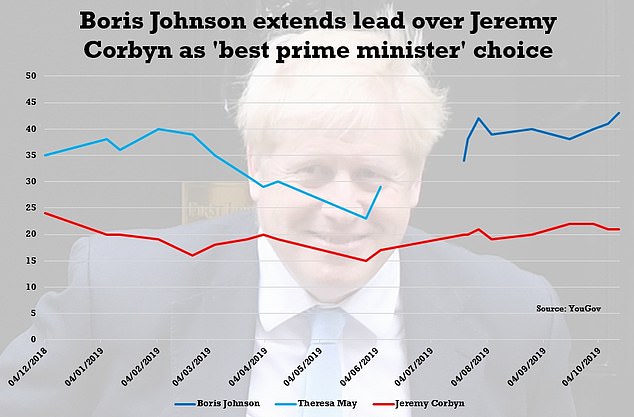 Boris Johnson tried to put a brave face on his crumbling hopes of a Brexit deal tonight as he teed up a massive ‘Super Saturday’ showdown with MPs.

UK and EU negotiators are frantically trying to find a way through the deadlock in time for tomorrow’s Brussels summit, with EU council Donald Tusk saying it will be obvious by late tonight whether they have succeeded. ‘Theoretically in seven to eight hours everything should be clear,’ he told the TVN 24 channel.

But the delicate process has been derailed by objections from the DUP, who complained that the mechanism for getting ‘consent’ from the people of Northern Ireland breaks the Good Friday Agreement – saying unionists should have a veto.

Despite the standoff, Mr Johnson suggested at Cabinet this afternoon that he still hoped the DUP can be won over. And he told a gathering of Tory MPs this evening that the government was on the ‘Hillary Step’ about to reach the summit of Mount Everest, He also insisted: ‘If it is not possible to achieve a deal we will still leave the EU on the 31st of October.’

Check this out  Boris Johnson fires broadside at Theresa May as Tory...

Downing Street confirmed the government will now table a motion for the Commons to sit on Saturday for the first time since the Falklands War.

If there is a deal at the summit tomorrow MPs will be asked to approve it on Saturday, but if not Mr Johnson is expected to stage a vote on whether to delay Brexit or go for No Deal. Remainers are also preparing a bid to force a second referendum, as the struggle for the country’s future intensifies.

Amid desperate efforts to win over the DUP – whose 10 MPs are seen as critical to unlocking a Parliamentary majority for a deal – there are hotly denied claims that billions of pounds more funding for Northern Ireland is on the table as a sweetener. 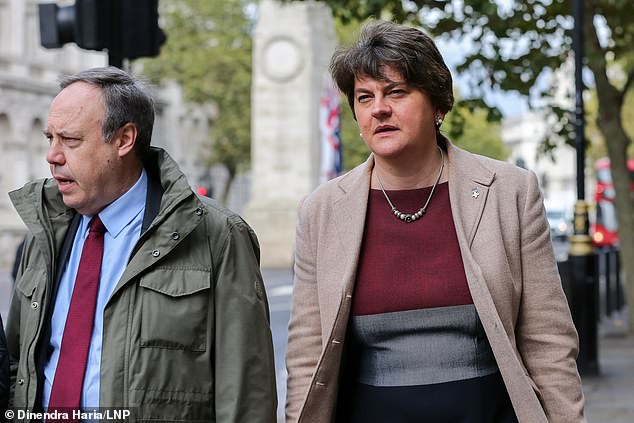 The unionists’ leader Arlene Foster (pictured with deputy Nigel Dodds today) was in No10 for more talks this afternoon, but there are little signs that progress was made

The unionists’ leader Arlene Foster was in No10 for more talks this afternoon, but there are little signs that progress was made. She has dismissed EU claims reported by Irish broadcaster RTE that she had given in on the issue.

Despite the EU’s Michel Barnier setting a deadline of last night for a deal to be finalised in time for tomorrow’s Brussels summit, a meeting of ambassadors from member states has been delayed twice to allow a few more hours of wrangling.

If the deadlock persists it means Mr Johnson will be caught by a Remainer law ordering him to beg for an extension beyond October 31. Failing to honour his key pledge would risk the Tories shipping votes to Nigel Farage’s Brexit in a looming election.

Brexit Secretary Steve Barclay seemed to confirm today that Mr Johnson would comply with the law and send a letter requesting a delay on Saturday – but caused confusion by condemning the idea of even a short ‘technical’ postponement.

There are claims the premier could try to dodge the legislation by sending a second contradictory letter, or getting another EU state to veto an extension.

Irish PM Leo Varadkar has conceded there are still ‘many issues’ still to be resolved, hinting that an emergency summit might be needed in around a fortnight’s time.