The scale of the task facing Tottenham with regards to their new White Hart Lane stadium was laid bare on Tuesday as new photos revealed the amount of work yet to be completed before it can open it’s doors.

Spurs had hoped to move into its stunning 62,062-seat home in time for the Premier League match against Liverpool on September 15, but have since been forced to relocate that and their following home game against Cardiff to Wembley.

But it would appear fans may be waiting even longer before they can sit down in the officially-named ‘Tottenham Hotspur Stadium’ as the latest pictures show no signs of the construction project being completed. 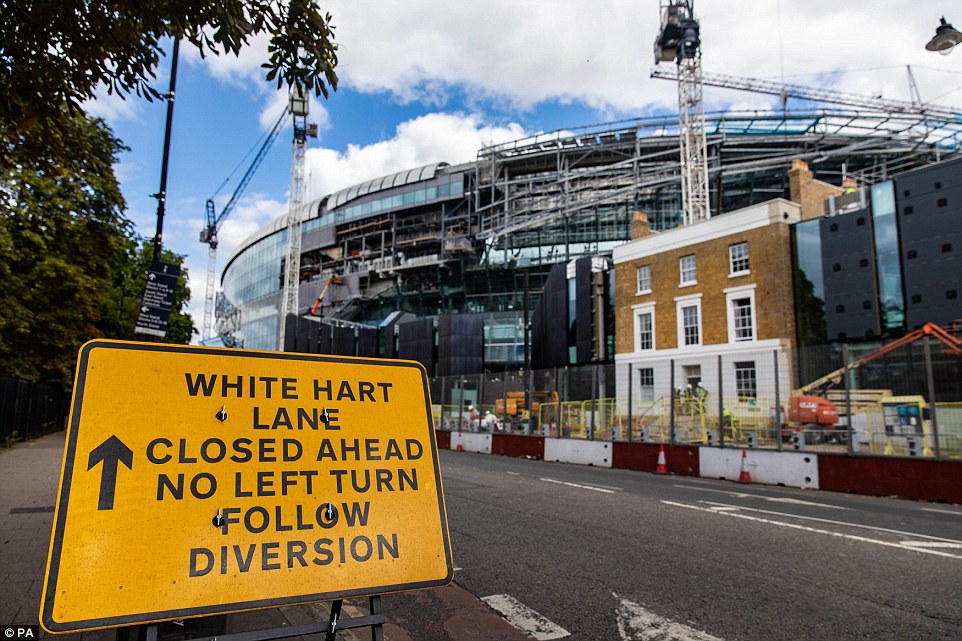 The officially-named Tottenham Hotspur Stadium continues to look very much like a building site on Tuesday, August 14 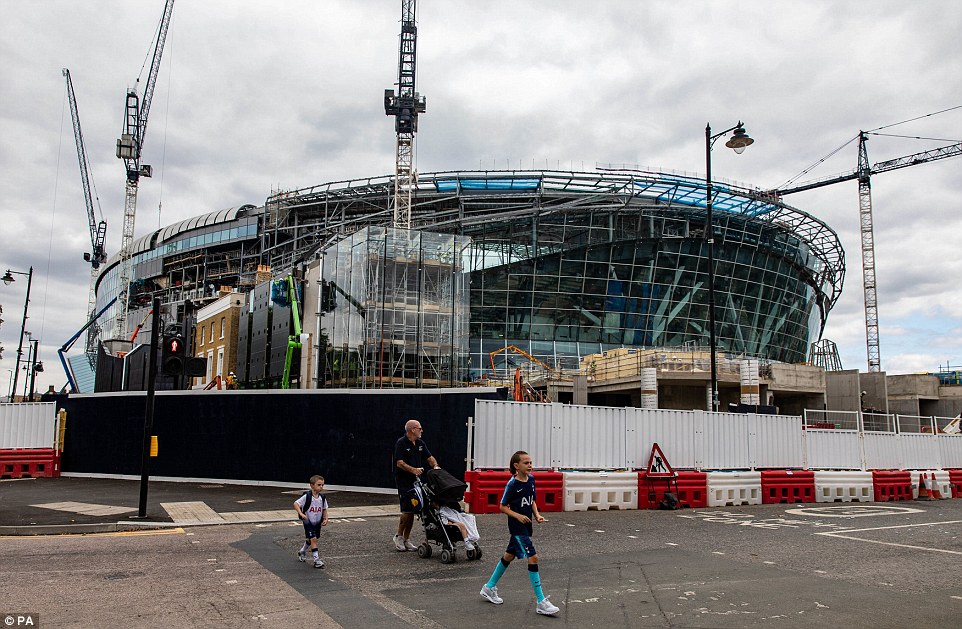 Tottenham’s 62,062-seat home was supposed to open its doors for a test event on August 27, which has since been cancelled 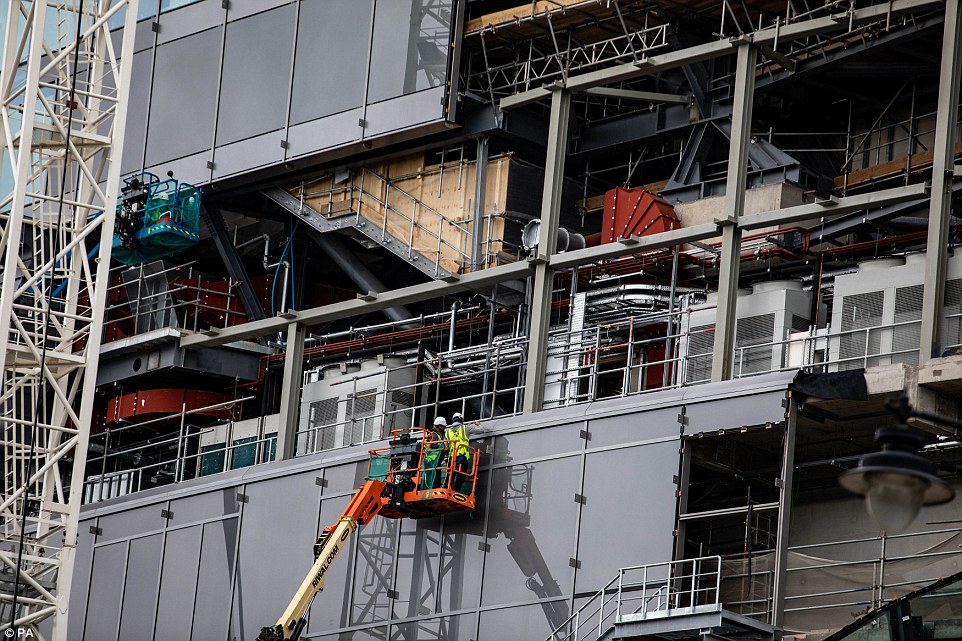 Construction workers continue work on the new stadium, which is expected to cost around £1bn by the time its completed 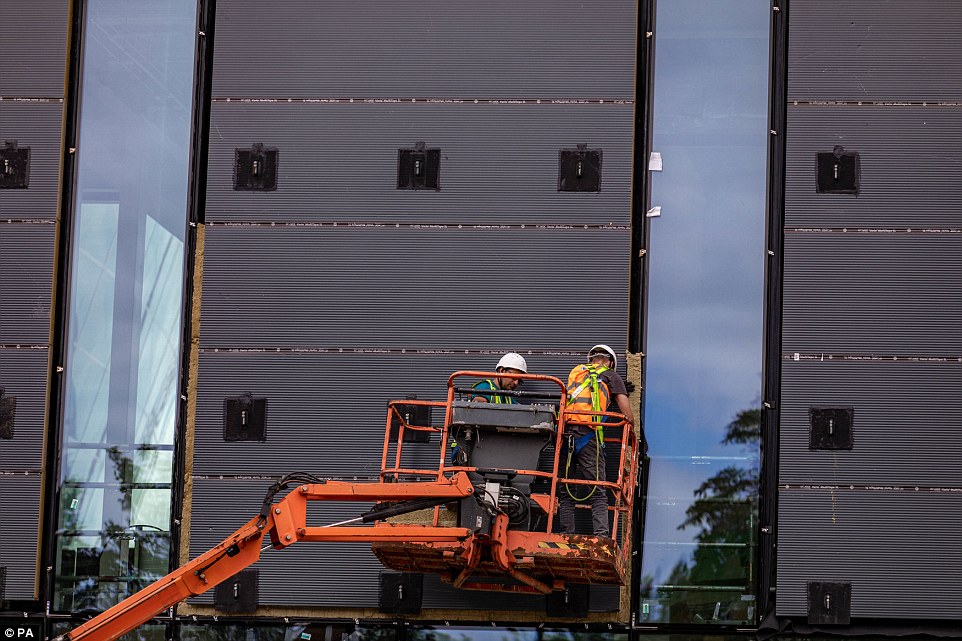 The club cited ‘issues with critical safety systems’ as the reason for the delay, but basic aesthetic construction such as the glass panels around the outside, is far from complete. Pictures show dozens of vacant spaces where the panels are yet to be fitted, leaving much of the inner workings of the stadium exposed.

September 15: vs Liverpool – Moved to Wembley

Their first test event, originally scheduled for August 27 and since cancelled, now serves as an uncomfortable marker for how far the project has fallen behind. As per building regulations, they will still have to host two test events at reduced capacities before officially opening the full 62,062 seats to fans.

It is also a blow for Tottenham’s NFL business model — cited as crucial to its viability in the development phase — with the match between Seattle Seahawks and Oakland Raiders on October 14 moving to Wembley.

The NFL’s Mark Waller said: ‘Everyone has been so excited about the prospect of playing in the new Tottenham Hotspur Stadium and I know all at the club are very disappointed, but determined to clear this final hurdle.

‘We totally understand the issue. We shall continue to work with them towards making our future games at Spurs a huge success. We are very excited about our long-term partnership.’

They face an even greater task on October 28 when they are scheduled to host Premier League champions Manchester City. With an NFL game due to take place at Wembley on the same day, Tottenham currently have the venue for the match as ‘to be confirmed’. There is no venue cited for their next home game against Chelsea on November 24, suggesting their homeless state could continue into the Christmas period and even the new year. 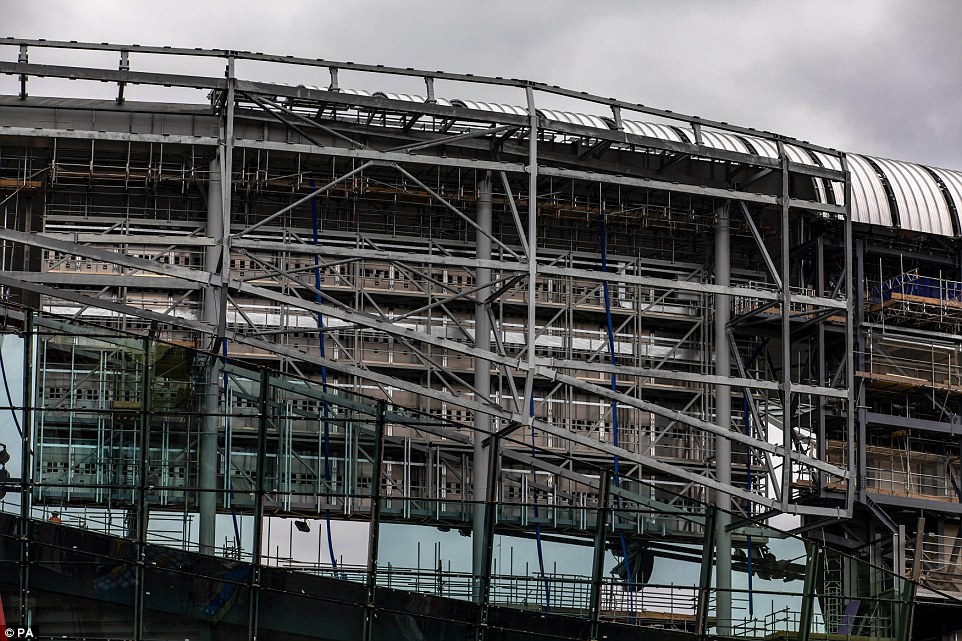 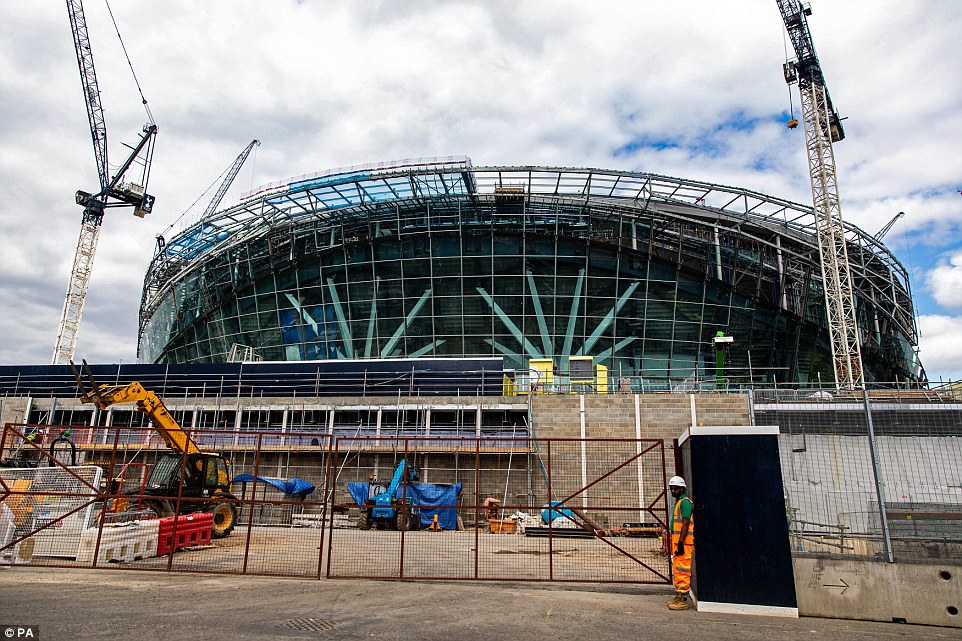 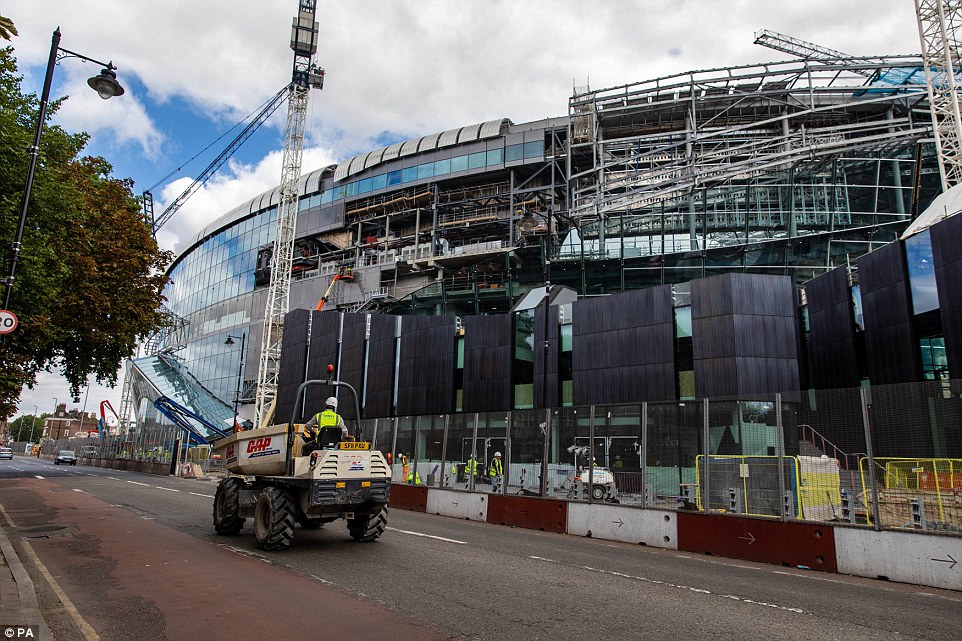 Tottenham have already informed the Football Association of the possibility that they will play at the national stadium this season and are understood to have made a payment to activate the option.

Spurs chairman Daniel Levy said on Monday night: ‘We know this will be disappointing for all our season-ticket holders, premium members and our fans worldwide. We appreciate the support our partner the NFL has shown since the extent of this issue became evident on Tuesday.

‘At the start of the project we asked for your support during what we knew would be a complex and challenging build and now we ask for your continued patience and forbearance.’

At least one Champions League home game will also have to be moved. They could play all three of their group games at Wembley before moving to their new stadium for the knockout stages, should they qualify. Meanwhile, the EFL will allow them to switch their Carabao Cup ties to away matches if they are drawn at home in the early rounds of the competition.

Tottenham face London rivals Fulham at Wembley this weekend but it was hoped that would be the only home game Mauricio Pochettino’s side would have to play away from their new home.

Check this out  Blooming angry! Hecklers brand Boris 'crazy' with 'preposterous ideas' on visit to a garden centre

There have been a number of logistical challenges in the ambitious attempt to build a new stadium on the same site as their old one in just 12 months – the only club to have constructed a new ground on the existing land – and Monday’s revelations have only served to complicate things further. 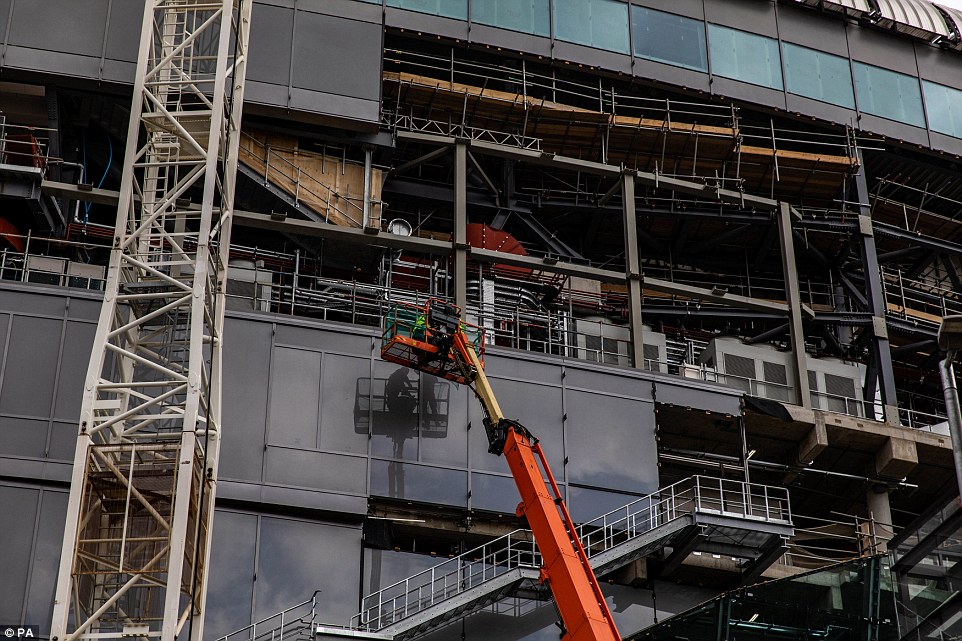 There appears to be a lot of work still to be done on the stadium, which was due to host its first match on September 15 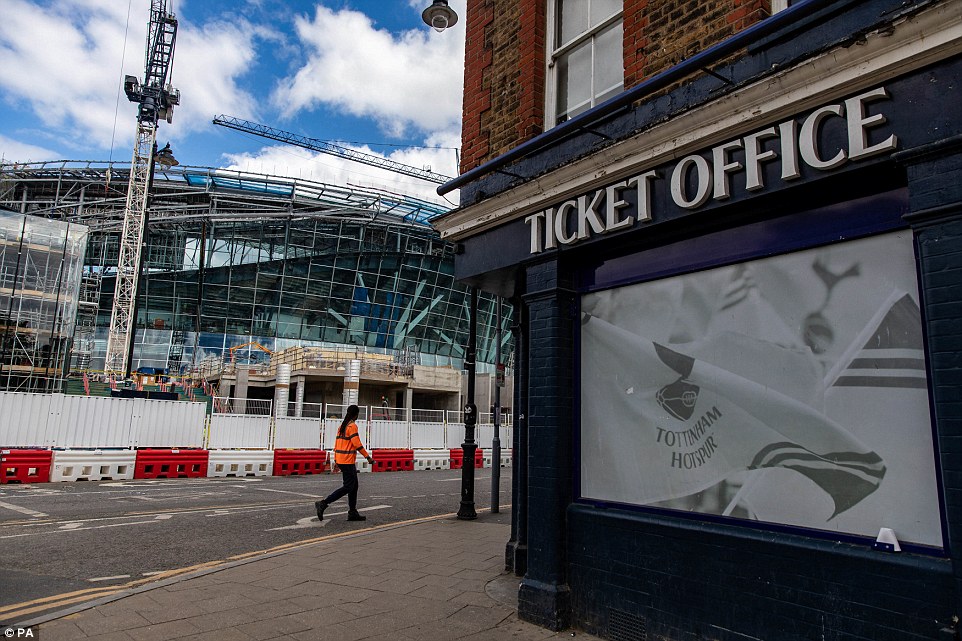 Tottenham’s old ticket office remains in place, but fans face a long wait to take their seats in the stunning new arena

‘Following the release of the Premier League fixtures for the 2018-19 season, we announced that, barring any significant issues with the final stages of stadium completion, our match against Liverpool on 15 September would be the first match in our new stadium. Recent testing and commissioning has now shown issues with the critical safety systems.

‘Urgent follow-up meetings with Mace and the trade contractors are now taking place. We are reviewing the situation and planned timetable to rectify and re-test, after which we shall be in a better position to outline a revised timetable.

‘The delays created by these difficulties mean that we can no longer hold the necessary Test Events on 27 August and 1 September. These will need to be rescheduled to take place ahead of any first official match at the new stadium in order to achieve the safety licence.

‘In the meantime, therefore, our upcoming Premier League matches against Liverpool (September 15) and Cardiff City (October 6) will be switched to Wembley, as will the NFL match scheduled for 14 October.’