Trump to round off UK visit and head for Putin meeting

Donald Trump is to round off his first UK visit as president today as he heads for a meeting with Vladimir Putin.

The US president has spent the last two nights at his Turnberry golf resort in Scotland after meeting Theresa May and the Queen in a whirlwind tour that took place amid mass protests against his policies across the UK.

Mr Trump and wife Melania are due to fly out of Glasgow Prestwick Airport on Sunday headed for Finland where he will meet the Russian leader for talks on Monday.

Before leaving the US for Europe last week, Mr Trump said: “So I have Nato, I have the UK – that’s a situation with turmoil. And I have Putin. Frankly, Putin may be the easiest of all.”

On Saturday, Mr Trump was heckled by protesters who branded him a “racist”as he played golf with his son Eric at Turnberry.

At the same time, thousands of people marched through Edinburgh to demonstrate against Mr Trump, following widespread protests on Friday with a massive march in London and events staged in cities including Glasgow and Belfast

At Turnberry, protesters who had gathered on the nearby beach climbed a hill to ensure the president could see them when he took to the golf course. 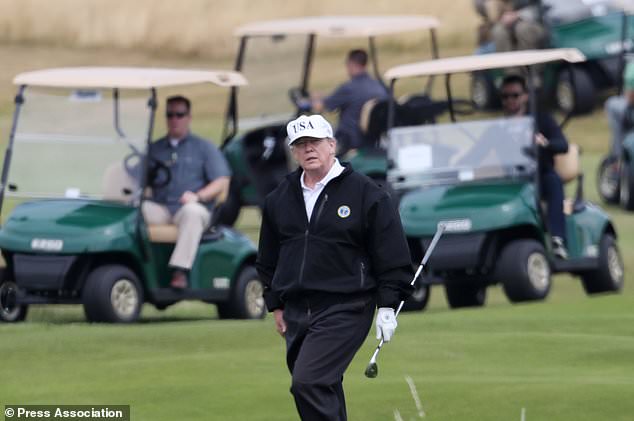 Mr Trump, the 45th president of the US, waved as they shouted: “No Trump, no KKK, no racist USA.”

In Edinburgh, crowds gathered outside the Scottish Parliament before setting off for the city’s meadows area for a Carnival of Resistance event, where the 20ft Trump baby balloon was flown.

Police Scotland said there were no arrests during the protest events on Friday and Saturday.

The president and his wife Melania arrived in Scotland on board Air Force One on Friday evening, before travelling by motorcade to the Trump Turnberry resort – one of two Scottish golf courses he owns.

On Saturday, Mr Trump tweeted: “I have arrived in Scotland and will be at Trump Turnberry for two days of meetings, calls and hopefully, some golf – my primary form of exercise!

“The weather is beautiful, and this place is incredible! Tomorrow I go to Helsinki for a Monday meeting with Vladimir Putin.”

A massive security operation was in place at Turnberry and Police Scotland are investigating after a paraglider flew over the area on Friday night with a sign claiming Mr Trump is “well below par”.

The incident, which took place shortly after the president and first lady had arrived, is being treated as a “breach of the air exclusion zone”, the force said.