US Open on Wednesday said it regrets that French player Alize Cornet was slapped with a warning for taking off her shirt during a match – a decision that was widely criticized as being sexist.

Cornet returned from a break in action during her match against Swedish player Johanna Larsson Tuesday with her shirt on backward. She took off the shirt and put it back on correctly while standing near the rear of the court and was given a code violation by chair umpire Christian Rask.

Cornet, who was playing in a doubles match Wednesday, was given no further penalty or fine. 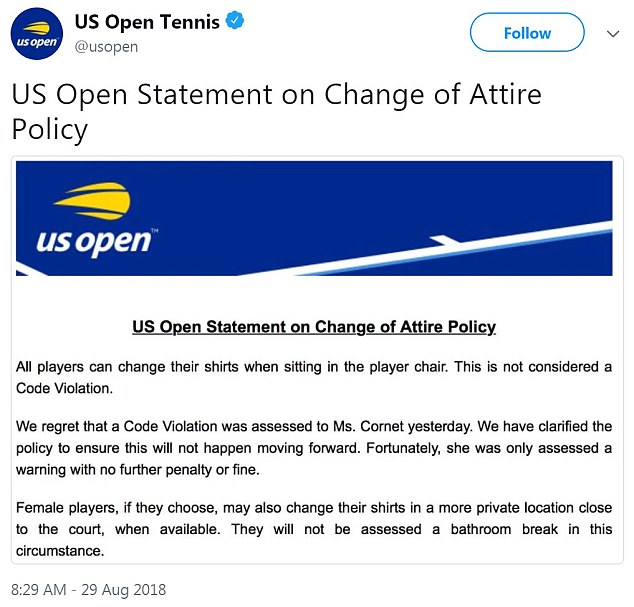 Walkback: US Open released this statement Wednesday expressing regret over the matter of Alize Cornet’s shirt change was handled the day before 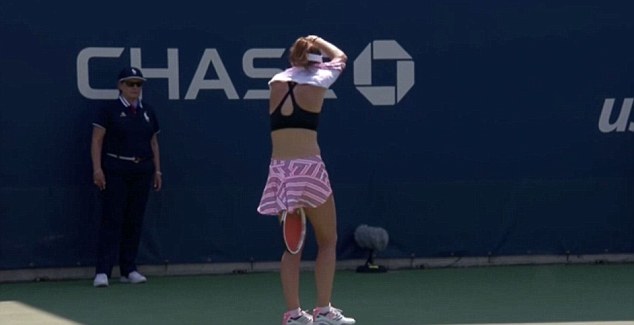 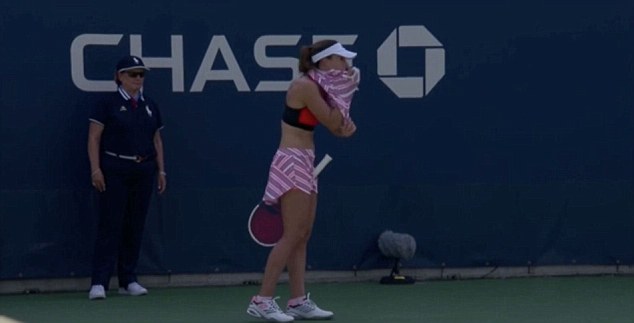 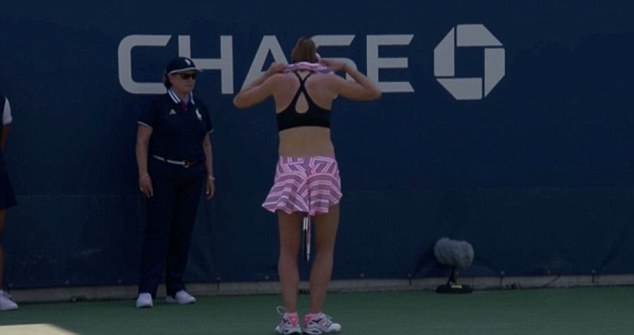 Cornet exposed her black sports bra during the quick change, which lasted about 10 seconds 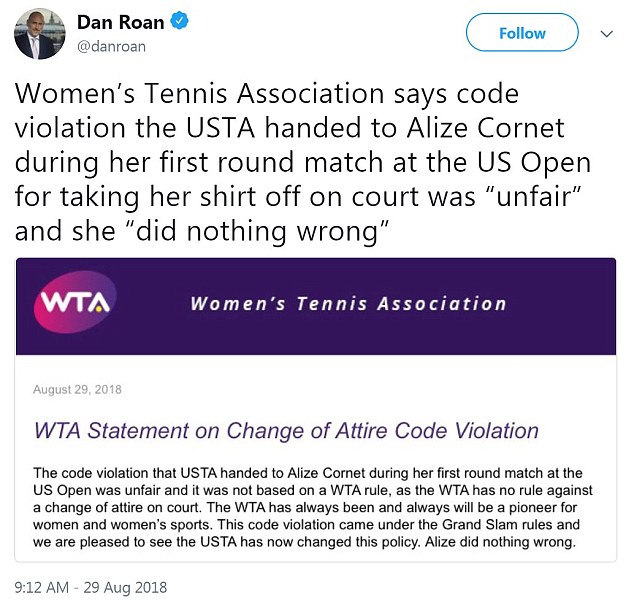 ‘All players can change their shirts when sitting in the player chair. This is not considered a Code Violation,’ the US Open said in a statement released this morning.

‘We regret that a Code Violation was assessed to Ms. Cornet yesterday. We have clarified the policy to ensure this will not happen moving forward. Fortunately, she was only assessed a warning with no further penalty or fine.

‘Female players, if they choose, may also change their shirts in a more private location close to the court, when available. They will not be assessed a bathroom break in this circumstance.’

The Women’s Tennis Association said the code violation handed to Cornet was unfair.

‘It was not based on a WTA rule, as the WTA has no rule against a change of attire on court,’ the ruling body said in a statement.

‘The WTA has always been and always will be a pioneer for women and women´s sports. This code violation came under the Grand Slam rules and we are pleased to see the USTA has now changed this policy. Alize did nothing wrong.’

Twitter users took to social media to express their fury after Cornet’s punishment – calling the rule ‘ridiculous’ and ‘sexist’. Many critics noted that male players frequently change their shirts while sitting in their chairs during changeovers.

Scottish tennis coach, Judy Murray, said in a viral tweet: ‘Alize Cornet came back to court after 10 minute heat break. Had her fresh shirt on back to front. Changed at back of court. Got a code violation.

‘Unsportsmanlike conduct….. but the men can change shirts on court.’ 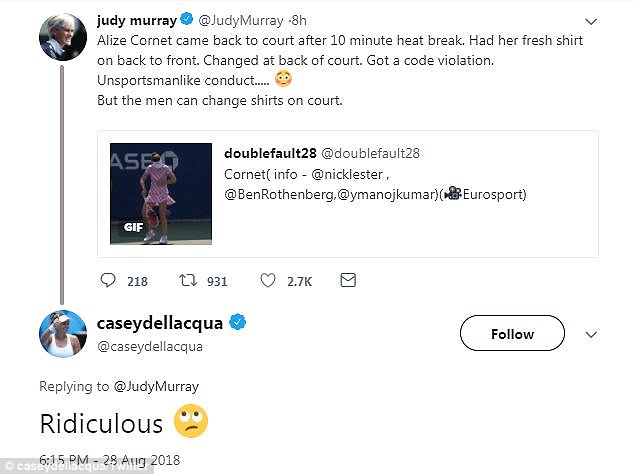 Scottish tennis coach Judy Murray said in a viral tweet: ‘Unsportsmanlike conduct….. but the men can change shirts on court’ 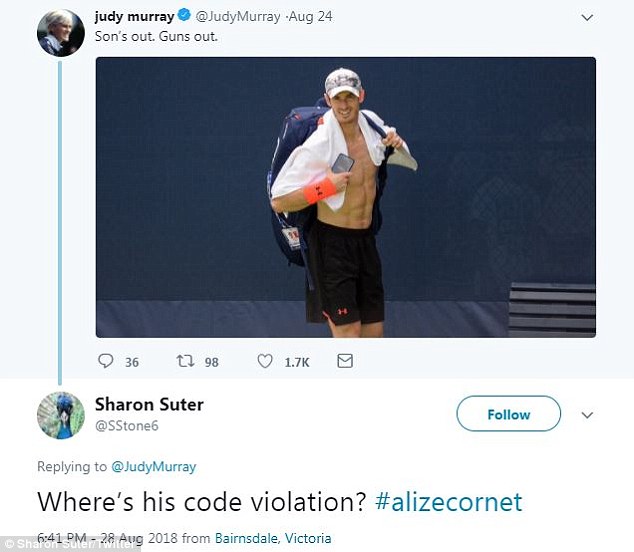 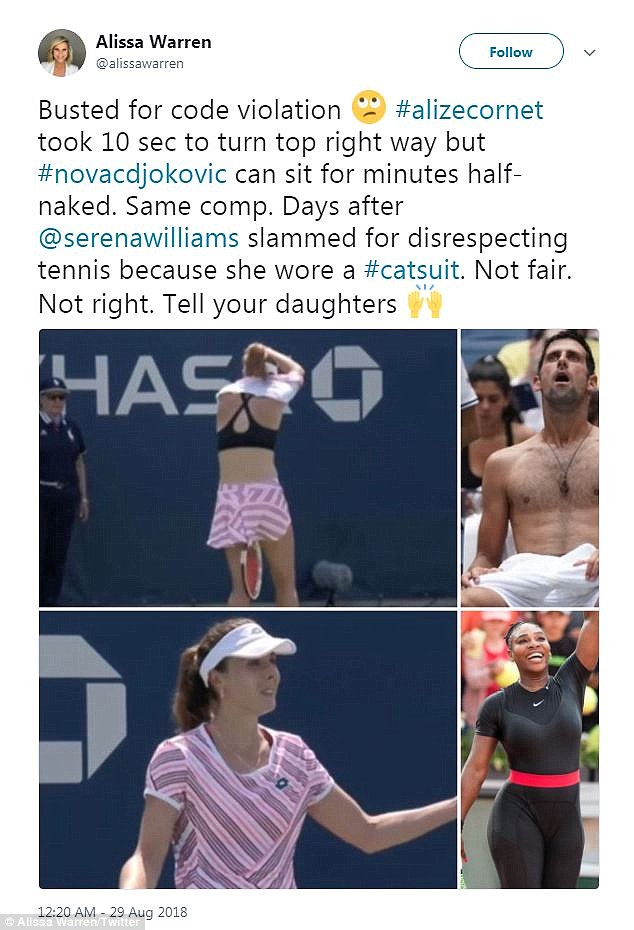 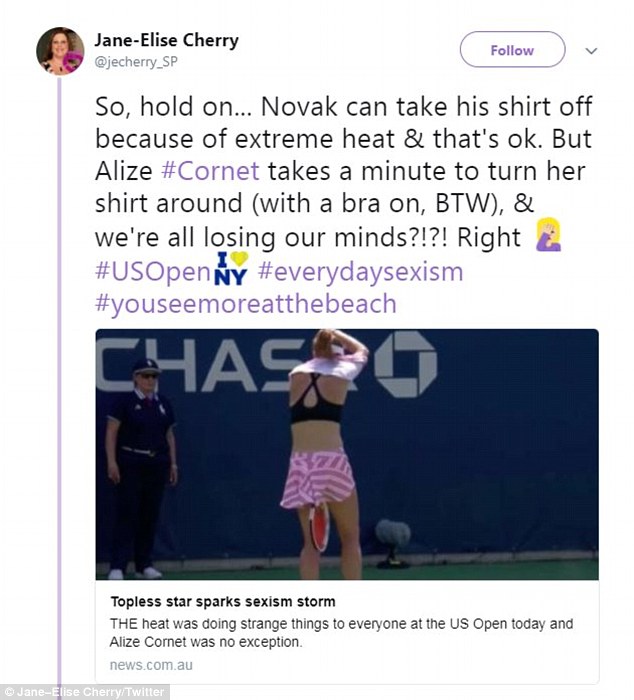 Check this out  Floods in India, Nepal, and Bangladesh leave 250 dead 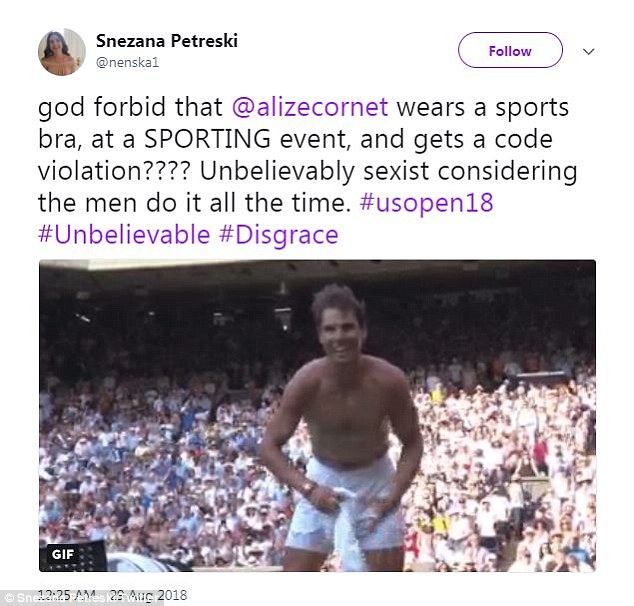 ‘Days after @serenawilliams slammed for disrespecting tennis because she wore a #catsuit. Not fair. Not right. Tell your daughters.’

And Jane-Elise Cherry added: ‘So, hold on… Novak can take his shirt off because of extreme heat & that’s ok.

‘But Alize #Cornet takes a minute to turn her shirt around (with a bra on, BTW), & we’re all losing our minds?!?! Right#USOpen #everydaysexism #youseemoreatthebeach’

Temperatures reached the mid-90’s this week at the tournament, resulting in a heat policy break being implemented.

Female players were granted the breaks between the second and third set, and male players, the third and fourth. 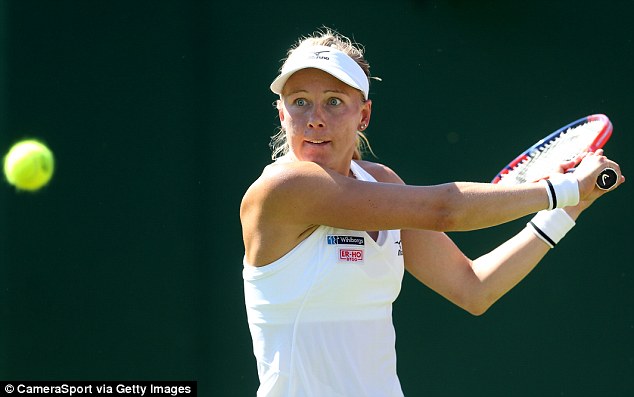 Cornet was in the tournament against Swedish tennis player Johanna Larsson. The French player went down to Larsson 4-6 6-3 6-2 in the match Tuesday. Larsson is shown above during a match with Venus Williams on July 2, 2018 in London, England