Footage taken from a street in Italy shows George Clooney was thrown several feet into the air when his motorbike collided with an oncoming car.

Clooney, 57, collided with a Mercedes on the Italian island of Sardinia about 7am on Tuesday, when it turned into his lane as he tried to ride past, Page Six reported.

Video taken from a fixed security camera shows another rider managed to get around the car, but Clooney, believed to be riding nearby, was reportedly hit.

In the video, he is seen flipping over the handlebars of his bike, flying into the air, appearing to hit the windscreen of the car, before tumbling onto the asphalt.

Fortunately the star was wearing a helmet and was driving slowly, but the windscreen of the Mercedes was badly smashed. 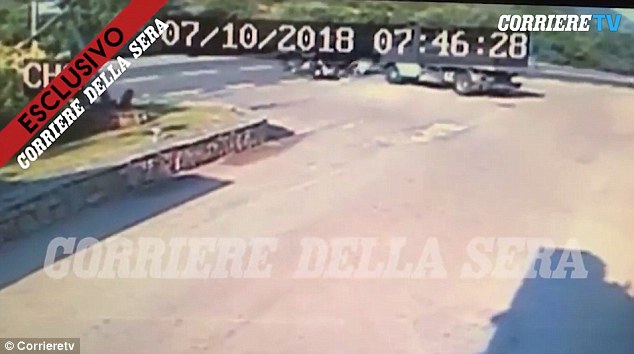 Pictured: Security footage shows the moment George Clooney smashes into a car while riding his motorbike through the Italian island of Sardinia

The driver of the vehicle is seen rushing to Clooney’s aid, as are other witnesses.

He was taken to John Paul II hospital in Olbia, but released after just a few hours.

The actor had a CT scan, which showed no fractures, but he has reportedly suffered trauma to the pelvis, hip and knee which should take around 20 days to heal.

A spokesman for the Oceans 11 actor told Associated Press he was ‘recovering at his home and will be fine’.

A source told MailOnline the actor had been riding his scooter from his house in Puntaldia,Sardinia, to the set of his new Hulu TV series, Catch 22, which is in Capo Ceraso, in Olbia, when the accident occured.

George was at the intersection of Costa Corallina, a tourist village with a private harbour, when he got hit by the car as it turned left to enter the village.