A Vietnam war veteran in hospice care said a final goodbye to his beloved dog as his dying wish.

John Vincent, 69, of New Mexico, served with the Marines for three years including in Vietnam. For years he lived with his five-year-old Yorkshire terrier Patch, but had to put his dog up for adoption when he entered hospice care last week.

Doctors say Vincent doesn’t have much time and last week he told a social worker at the hospice center that he had just one request – to see his beloved pet one last time.

On Thursday that wish came true and he was reunited with Patch at the Hospice Center at the Raymond G. Murphy VA Medical Center in Albuquerque. 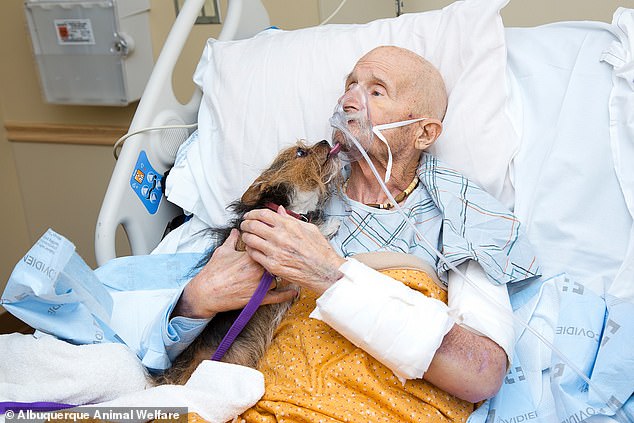 Vietnam vet John Vincent, 69, entered hospice care in New Mexico last week and was forced to give up his beloved five-year-old Yorkshire terrier Patch for adoption 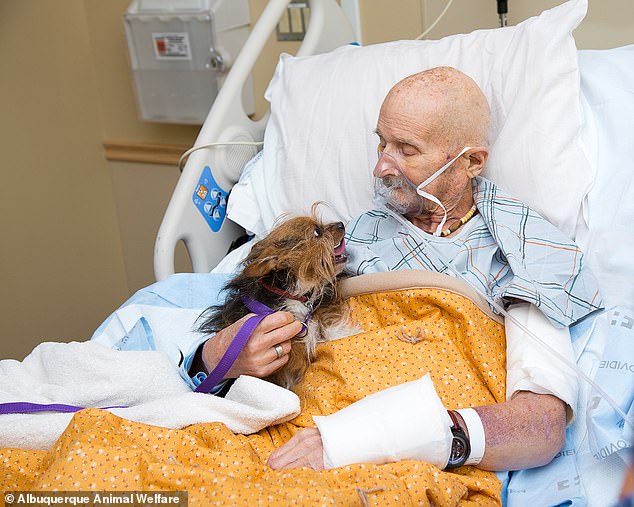 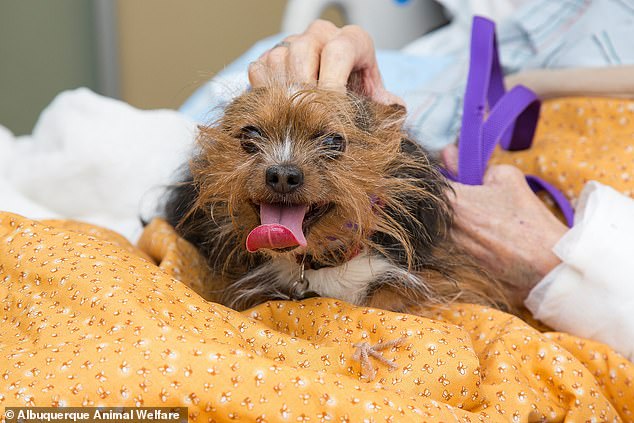 On Thursday morning his wish came true and Albuquerque Animal Welfare, the shelter caring for Patch, brought the pup to the hospice, where Patch started to whimper upon seeing his former owner

‘Yeah, that’s me. That’s daddy,’ Vincent said when he was finally reunited with Patch and the pup jumped onto his owner’s lap. ‘Are you happy to see me? I’m so happy to see you.’

Animal Welfare snapped photos of the sweet moment Patch leaped on Vincent and licked his face.

‘I asked him if that’s something that would be meaningful for him. And it came together very quickly,’ palliative care social worker Amy Neal said to the Albuquerque Journal on helping make the special pet and owner reunion happen.

‘When I reminded him this morning that they were coming, he goes, “Is this really happening?”‘ she added.

‘When the request came in, it was an immediate “absolutely,” and let’s do whatever we can to get it done,’ Animal Welfare director Danny Nevarez said. ‘It was as simple as getting Patch over here.’ 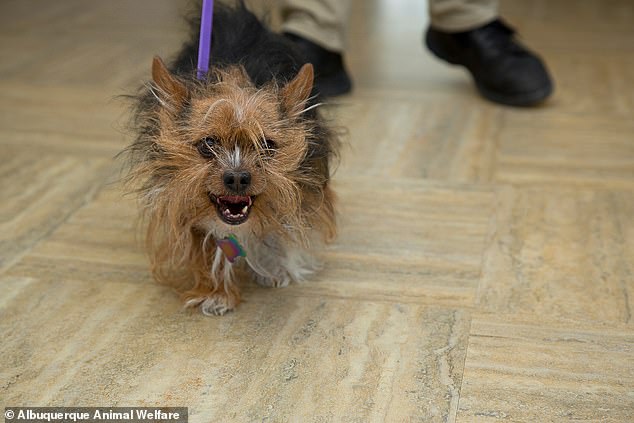 Check this out  Britain's Got Talent: Singer Jacob Jones reveals he and his fiancée are expecting a BABY

Shelter workers said Patch was quiet throughout the commute to the hospice, but began to cry upon seeing Vincent 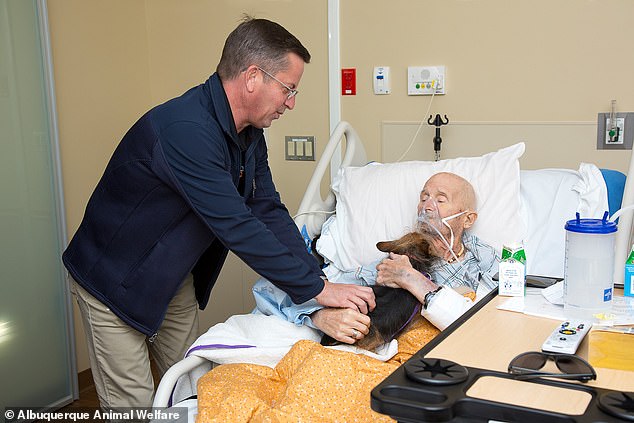 ‘Yeah, that’s me. That’s daddy,’ Vincent said when he was finally reunited with Patch and the pup jumped onto his owner’s lap. ‘Are you happy to see me? I’m so happy to see you’ 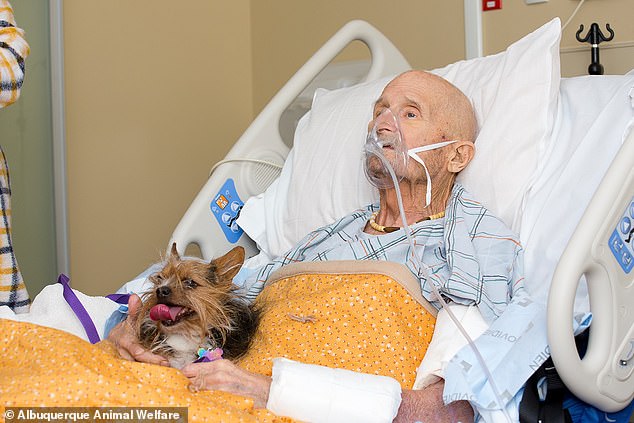 Vincent, who was born in Montana and raised on a ranch, enlisted in the Marines when he was young and served for three years including in Vietnam 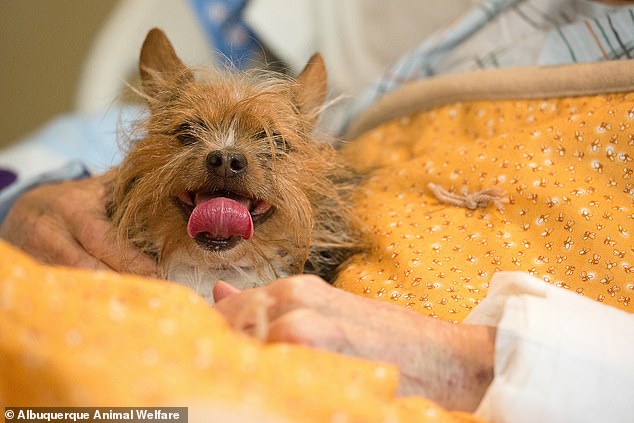 Nevarez says Patch was quiet throughout the commute to the hospice, but began to cry upon seeing Vincent.

Vincent, who was born in Montana and raised on a ranch, enlisted in the Marines when he was young and served for three years including in Vietnam, the paper reported.

When asked about his time in the military, Vincent said: ‘I always went where the best went.’

Vincent said he got Patch when his neighbor’s dog had a litter of puppies. 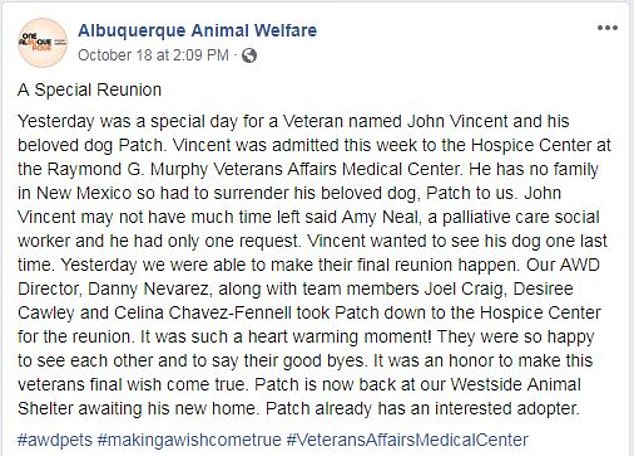 ‘He was the smallest, and I wanted one that could ride on my bike. The only hair I had was on my chin, which was called a patch. … And he had a little white patch, so we were the patch brothers,’ Vincent said.

The two would ride in Vincent’s Harley motorcycle, with little Patch wearing his own pair of tiny googles. After Vincent retired in New Mexico, the pair would take walks every night.

Animal Welfare shared pictures of their sweet reunion on Facebook on Friday saying: ‘They were so happy to see each other and to say their good byes. It was an honor to make this veterans final wish come true.’

The shelter followed up saying that Patch found a new owner and will be joining his new home soon.