England’s heroes washed down pizza with champagne and sang Sweet Caroline in the Lord’s Long Room with their vanquished opponents as the celebrations of their momentous World Cup win spilled into the early hours of Monday.

Revelry that began on the outfield with family and friends moved on to the £500-a-night Landmark Hotel, where England regularly stay in London.

After sending their loved ones on ahead to the hotel, the 15-man squad spent a final hour together at Lord’s, reminiscing about a final victory that had secured their first global ODI crown after 44 years. 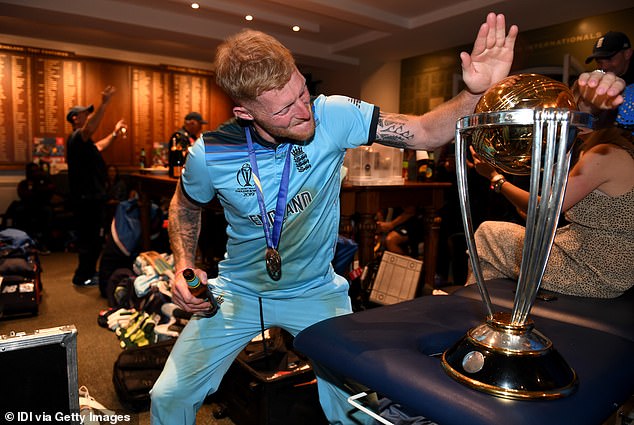 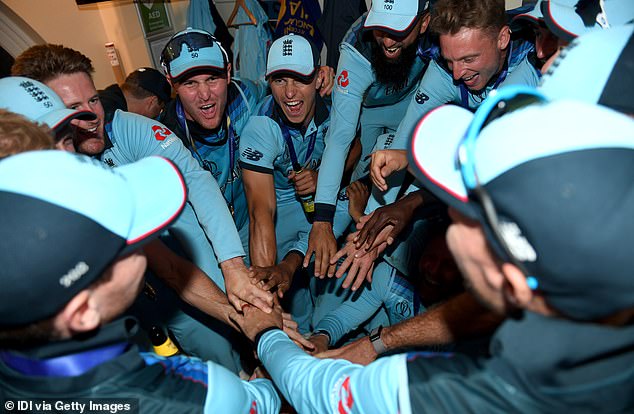 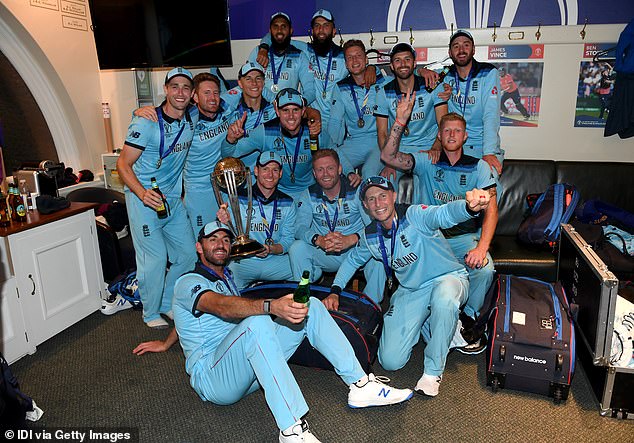 Outside the Grace Gates, scores of well-wishers waited for a glimpse of the World Cup winners.

Then, at the hotel, the players ordered pepperoni pizzas plus tuna and club sandwiches for their 150-strong party, along with bottles of Tattinger champagne at more than £100 apiece, red wine, including a £47 malbec, and beers. They continued their party until 5am with the entire nation’s full permission.

Some were a little jaded on Monday morning, though Jason Roy tucked into champagne and orange juice while enjoying a cooked breakfast with his family.

All-rounder Chris Woakes said: ‘Some of the guys got no sleep or a little sleep — I got a couple of hours. It’s incredible. We were in the dressing room with family and stuff — for them to be in the pavilion at Lord’s was pretty special.

‘To spend that time with your family, we take it for granted turning up to Lord’s and being around that environment quite often. For families to see that and share that moment was really special.’ 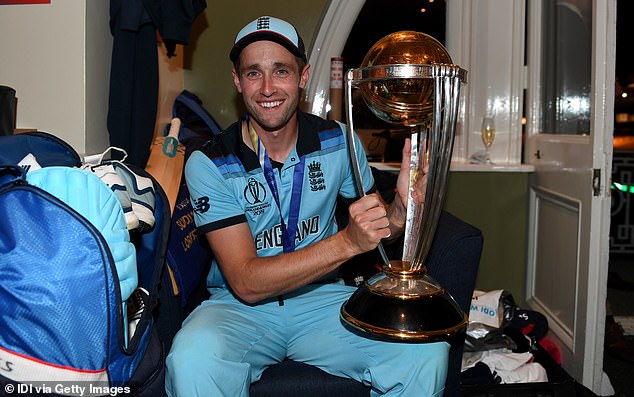 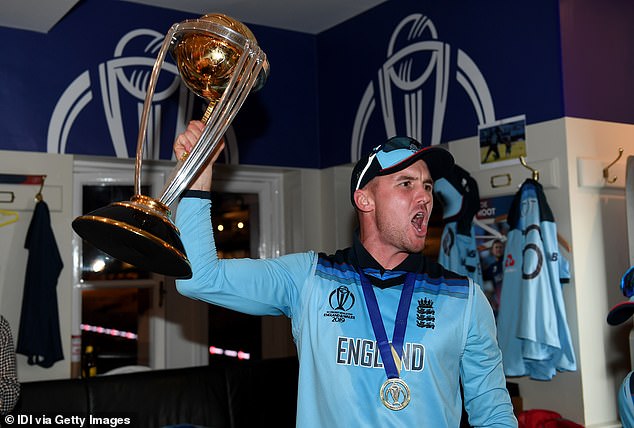 Ben Stokes had provided what Eoin Morgan dubbed a ‘super-human’ performance to haul England level with New Zealand’s score of 241.

Acquaintances of other players were taken aback as they mingled on the hallowed turf later and Stokes instigated conversations about their job changes and house moves, as if it was a regular Sunday night at the local cricket club.

Stokes had somehow whittled down the equation to two for victory off the final ball in the company of his Durham colleague Mark Wood, the No 11 who had been among those struggling to combat jangling nerves in the dressing room during the most pressurised of finishes.

Bowler Liam Plunkett revealed: ‘The only time I was tense was when I was waiting to bat, not next in, but a couple in! Woody was sat in the back room and hid away. “I might have to bat today,” he said. “Yeah, you might have to, mate,” I agreed.’ 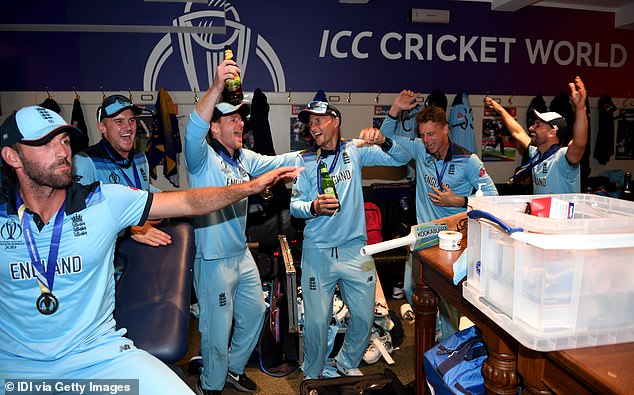 Wood did not face a ball, but, hampered by a sore side suffered while bowling, agonisingly failed to complete the second run that would have avoided cricket’s version of the penalty shootout.

Some would have been forgiven for thinking the game was up for England when they required 43 runs to win from 25 balls. But those crammed on to the home balcony or wedged behind them refused to do so.

In his frustration at failing to seal the win in regulation time, Stokes booted his bat with his left foot.

He admitted: ‘Needing two runs off one ball, all I was thinking was, “Just don’t hit it in the air and get caught”. It was just, “Don’t try to be a hero and do it with a six”.

‘I wish it had gone for two because I wasn’t best pleased with myself, walking off and back to the changing rooms for that 10-minute turnaround.’

The New Zealand-born all-rounder added in his Daily Mirror column: ‘I went up the stairs to the dressing room and I could barely make it up there. Morgs said, “Right, we need a left and right-hand combination”, and I said, “I reckon we should send out J-Roy and Jos!” Then I understood I had to get back out there.

‘I had to go and have five minutes to myself in the shower area of the changing room. I was pretty annoyed, angry. I had to get my head switched back on because I knew there was a job out there to do. I was full of adrenaline, so I needed to make sure my head was in the right place.’ 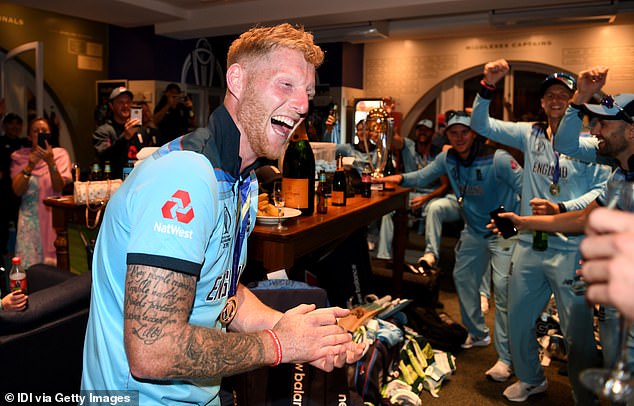 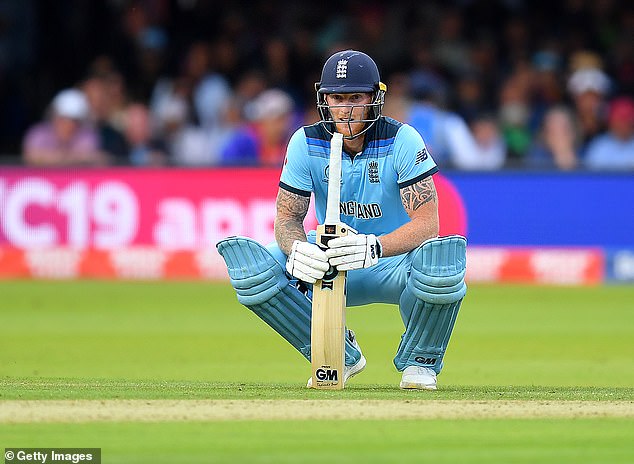 Later, opener Roy would play another key part in the super over — a decisive one as it turned out — hurling in his return from the deep for wicketkeeper Jos Buttler to remove the bails at the Pavilion End and spark scenes of sheer pandemonium.

The players showered each other with magnums of Veuve Clicquot champagne after collecting the trophy. But it was the moment of victory that will live longest in the memory.

‘I remember running off and throwing my gloves off and my hat off,’ said Buttler. ‘Then I saw Moeen Ali aeroplaning past me and Jofra Archer lying on the floor at some point, so I went and gave him a hug.

‘It has been fun watching some of the videos back, all the TV angles, the people in the crowd who were filming it. It was a truly incredible 10 seconds.

‘It is pure elation, feelings that you’ve never felt before. To do it in a game like that — at a home World Cup final at Lord’s — is truly remarkable.’

In contrast, the New Zealanders sank to their haunches in despair after losing a world title on a boundary count of 26-17 following the most dramatic one-day match in history.

In the circumstances, it made the Black Caps’ sportsmanship all the more remarkable. 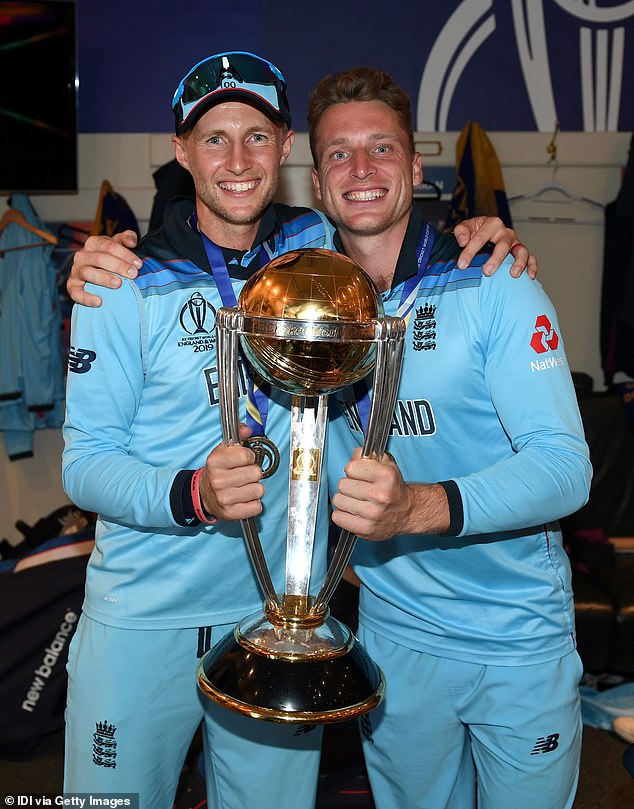 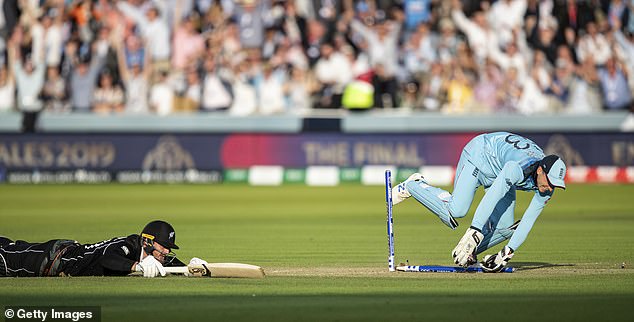 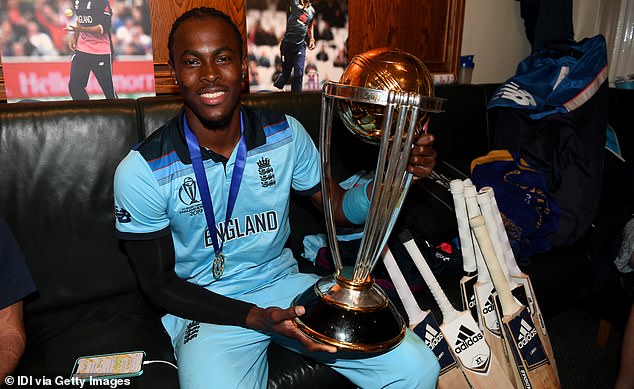 Within a couple of hours of the post-match ceremonies, Kane Williamson’s team were sharing beers with their conquerors and guests, and even joined in England’s sing-song.

As the golden evening sunshine left the playing area, the England squad departed to continue their party in the sanctuary of the pavilion, extending the invitation to opponents with whom they will always share a special bond.

England had unashamedly name-checked the Black Caps for influencing their transformation from 50-over chumps at the 2015 World Cup to 50-over champs.

Captain Eoin Morgan counts former Kiwi skipper Brendon McCullum as one of his closest friends. McCullum was master of ceremonies at Morgan’s Somerset country wedding last autumn and has been credited with influencing the Dubliner’s style of positive leadership. 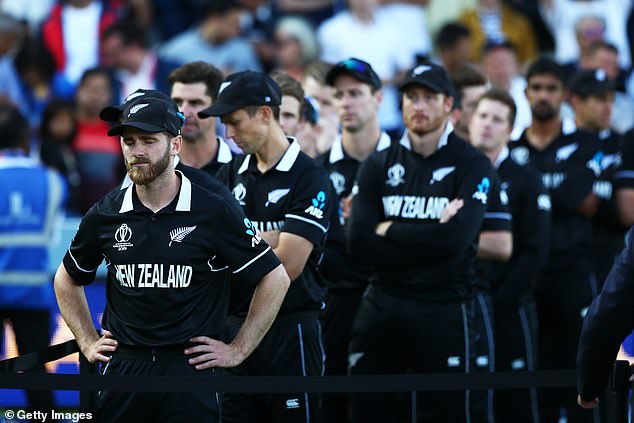 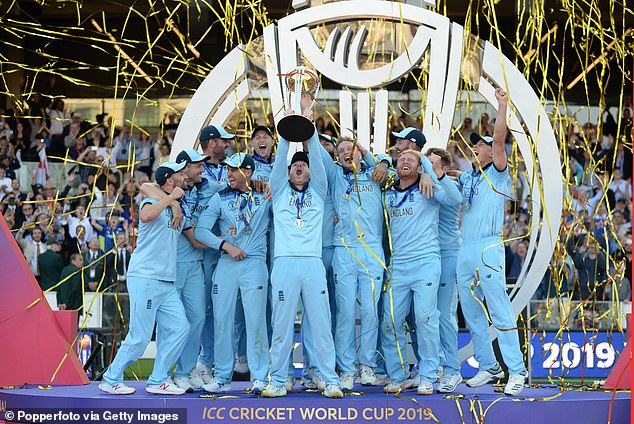 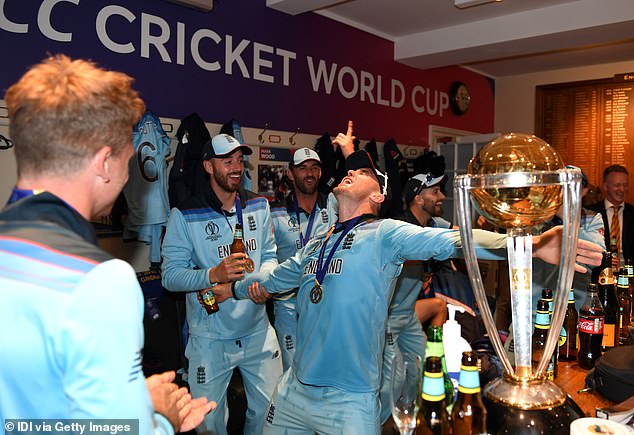 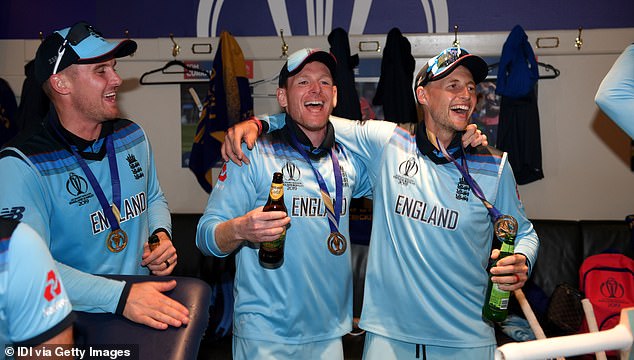 Joe Root, Jonny Bairstow, Adil Rashid and Plunkett played alongside Williamson for Yorkshire for several seasons, and New Zealand wicketkeeper Tom Latham’s time in Durham’s academy in 2012 coincided with the emergence of Stokes and Wood in the club’s first team.

Nevertheless, the corinthian spirit in the aftermath of such a gut-wrenching loss added a wonderful twist to English cricket’s headiest day since the 2005 team under Michael Vaughan toppled an Australia XI considered to be the best Test team of all time.

The mood had barely been diluted 15 hours later when the England team, fronted by Morgan, paraded their new silverware across the Thames at the Oval.

As they did so, the cricket world was reliving the events of a double dead-heat that delivered agony and ecstasy in equal measure. 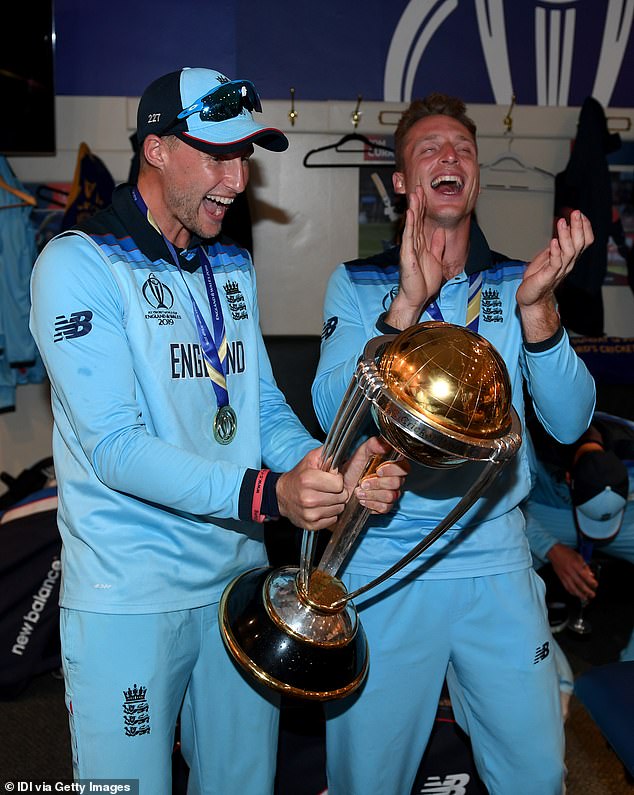 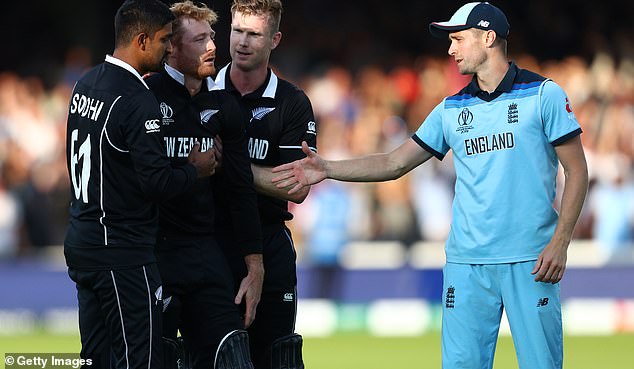 It was probably best summed up in a tweet from one of the most gracious of New Zealanders in Jimmy Neesham, whose towering six off Archer in the final set of six balls momentarily silenced an English-dominated crowd.

‘That hurts. Hopefully there’s a day or two over the next decade where I don’t think about that last half-hour. Congratulations @ECB_cricket, well deserved.’

A reminder that ‘Good times never seemed so good’, as the lyrics of Sweet Caroline have it, was not applicable to all, no matter what was belted out late on Sunday night.